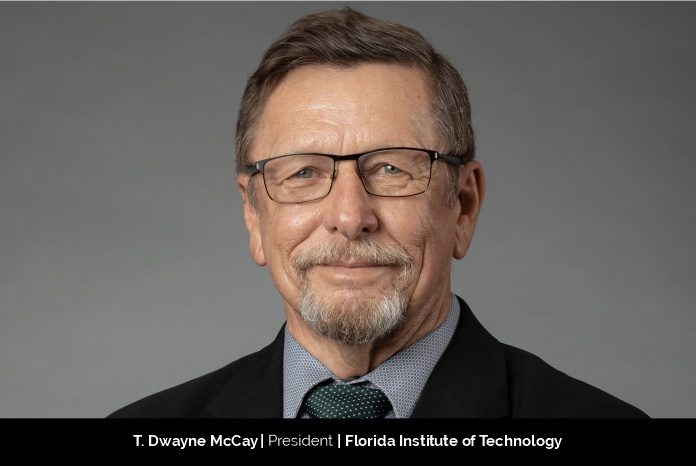 Dwayne McCay, President and CEO of Florida Institute of Technology, or Florida Tech, has a calm demeanor that masks his unpredictable, proactive approach. He is always ready with an input that no one else has thought of, which surprises a lot of people. He is also flexible, full of wisdom, and has a realistic perspective. His rapid, early decisions and willingness to change during the pandemic, for example, organizing virtual commencement ceremonies and taking a range of other steps ensured a safe and healthy campus environment. Thanks to his foresight, Florida Tech saw some of its highest enrollments in 2020 despite the pandemic.

And, as someone who has worked in the industry for about 30 years, the erudite and polite Dwayne values the operational side of his job and isn’t afraid to have the final say. He quotes President Harry S. Truman’s famous motto, “the buck stops here,” to describe his leadership style as the President of Florida Tech, the top-tier national research institute in Melbourne, Florida. And under his stewardship, the institute is striving to educate students for a lifetime of success, do research for the benefit of all humankind, and build global citizens for a better world.

Dwayne has always been passionate about education, primarily because no one from his family had a college education. And, as he became interested in science, he set out to acquire an advanced degree. “If you are going to do science for a living, you require an advanced degree,” he says. Dwayne, however, had not thought of making a career in higher education. “My life has been driven by going from one opportunity to another, so I never chose to go into higher education,” he says. “It chose me to come in and do it.”

Before he embarked on a career in higher education, Dwayne, who holds a Ph.D. in Engineering and Mathematics from Auburn University, worked at  NASA’s George C. Marshall Space Flight Center, the Air Force Rocket Propulsion Laboratory, ARO, and other industrial organizations. He went from one engineering and design job to another engineering job to another engineering job. “I was changing jobs not because I was not happy where I was, but there was an opportunity that really enthused me,” Dwayne says.

“When you come to a fork in the road, take it” is one of the most quoted philosophies of Yogi Berra, the Yankees Hall of Fame catcher. Dwayne quotes that to say, for him, one of those forks ended up being higher education versus staying in engineering. He had to choose between the two. “The fascination of going back to younger people and doing some research, and doing things that are done in the research university – that was the excitement of the time.” And he feels that he is in the right job, as he has never dreaded going to work even for a single day. He cites Confucius’s quote to stress that: “Choose a job you love, and you will never have to work a day in your life.”

On Friday, June 13, 2003, Dwayne joined Florida Tech as provost. He says that at the time, he was not quite sure what a provost was. And, soon after his arrival, the then President of Florida Tech, Dwayne’s boss, took an extended holiday. “So, all of a sudden, I was in charge,” he says.

Dwayne recalls, on his first day at work, when he was walking across the campus in the heat, wearing his heavy suit, he met two grounds workers. They exchanged a few words, and the two men asked Dwayne what he did, and when he replied that he was a provost, they responded, “Really, Woah! That is impressive.”

“I said to them, thank you, I’m excited about it, and I’m looking forward to it,” Dwayne says. And they said, “It’s really great to meet you, Mr. Provost.” But, when he turned a corner, he heard one of them ask the other, “What the hell is a provost?”

Dwayne smiles and says that he thought, “Jeez! That guy doesn’t know any more than I do. I was hoping to get a little advice.” He adds that he went from that to becoming responsible for much of the campus and the academics to the point that when his boss retired, Florida Tech elevated him to the job of President. Dwayne was installed as the institute’s fifth president on Sept. 9, 2016.

Prior to joining Florida Tech, Dwayne worked at the University of Tennessee in Knoxville as vice president for research and information technology. And, before stepping on the academic path, Dwayne says that he used to do “real work” as opposed to management. “My life before this has been really driven by developing intellectual property, implementing some of that, but primarily doing true engineering tasks for the automotive industry, space industry, and whoever that might be. It was hardcore work.”

Dwayne was a hurdler in high school, and he sees the sport of hurdling as good training for life. “You’ve got to get over those hurdles to finish the race,” he says. “It’s really important to get over them properly, clear them as low and as close to the hurdle as you can. But, if you get too low, you’re going to lose the race. You’re not going to clear the hurdle.” Challenges are like hurdles for Dwayne. He needs to clear them to get over a particular challenge.

You Really Don’t Know Success Until You See It

“You really don’t know success until you see it,” Dwayne says. Once a goal gets set, certain strategies and tactics are laid out to achieve it. And, if the goal is achieved, it is obvious that there has been a success. Dwayne, however, learned a lesson a long time ago, following a major failure. And, he learned that from one of his “very wise” supervisors.

Dwayne has worked at several different positions in different parts of the country. Once, he was running a major engineering project for the U.S. Air Force. A lot of money was spent on it, and Dwayne had invested a lot of sweat equity in the program. The project turned out to be a failure. “A major failure,” Dwayne says. “We didn’t get any good results out of it.” Dwayne became disappointed with the project as well as with himself for failing. His supervisor pointed out to him, “Sometimes you make some really good decisions that have bad outcomes. And, because you can’t control everything that happens, you didn’t necessarily make a bad decision. You simply made the right decision, and it didn’t have the outcome that you hoped for or perhaps even anticipated.” The supervisor’s words had a profound effect on Dwayne. It completely changed his philosophy and outlook on life.

Dwayne also shares the coaching philosophy of his hero John Robert Wooden, one of the greatest NCAA basketball coaches of all time. “Be quick but don’t hurry” is what he handwrote in a copy of his book that he gave to Dwayne. “I never forgot that,” Dwayne says, adding, “We need to take our time to do it right. And, if you take your time to do it right, you have been successful, even though you may not have got the outcome that you anticipated.”

Going Back to the Future

Dwayne wants to refocus on things they do “really, really well” at Florida Tech. He looks at things through three criteria: strengths, weaknesses, and critical weaknesses. When things are critical weaknesses, one needs to shore them up. “If you don’t do them a little better, they are going to destroy the organization,” Dwayne says, adding that it is best to do away with things that are weaknesses. One needs to allocate most of the resources to the organization’s strengths. “So, we are doing that, and we are going back to our technological roots. We are trying to shore that up,” Dwayne adds. Florida Tech is also looking in new areas such as biomedical. “We’ve almost finished construction on a new biomedical research building,” Dwayne says.

Along with new areas, the institute is also investing in its old strengths, such as ocean engineering. A new research building is being built for it as well. “We’re trying to re-invest in things that we used to do well, that we were well known for,” Dwayne says.

Dwayne loves what he does and sees a bright future for Florida Tech. Today’s challenges can become opportunities to provide new educational offerings to tomorrow’s students.

Carolyn Lewis: Transforming the eLearning Industry with a Passion for Life-long...

Gina Rivera: An Iconic Face Changing the World of Beauty