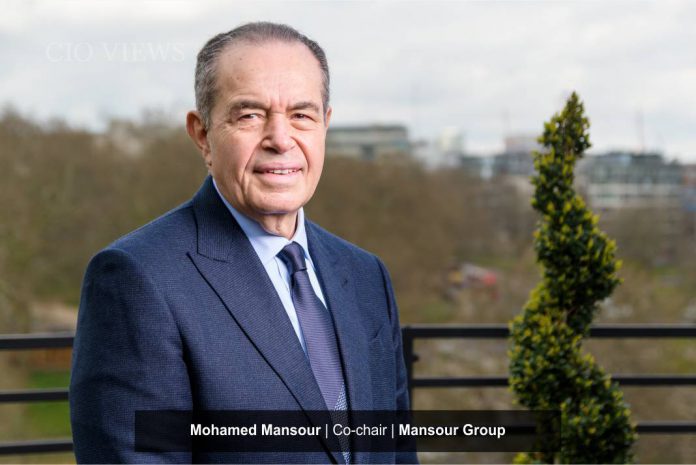 A successful business generates consistent profits and attains a positive market value thereby fostering not only the company’s growth but growth of every client, employee and leader associated with it. One such example is the success graph of Mansour Group, the second largest company in Egypt by revenue. The company holds a prestigious legacy that started in 1952 and continues to redefine success with operation in 120 countries today. With an employee strength of 60,000, the revenue generation of Mansour Group as of 2016 was $6 billion. Mansour Group is the largest General Motors distributor in the world, fifth largest distributor of Caterpillar Inc and represents some major international brands including, UPS, Red Bull, Chevrolet, McDonald’s etc. The empire that was initiated by Loutfy Mansour is carried on exceptionally well by his sons Mohamed, Youssef and Yasseen. We are to have the opportunity to cover the inspiring insights of the Chairman of Mansour Group, Mohamed Mansour. As he shares a few words of wisdom with us from the Mansour Group success journal, we are certain that it will be a source of motivation for every passionate businessperson.

My dreams and aspirations while growing up was to continue the legacy that my father has created and to expand the Family Business. Mansour Group started in the exporting business in the 1950s by the creation of Loutfy Mansour and sons’ company, which was one of the largest Egyptian cotton exporting companies in Egypt. In the 1960s our firm was nationalized like many other Egyptian companies at the time while the four sons Ismail, Youssef, Yasseen and myself were getting our education in the USA. After Sadat came to power in 1971 you could go back and start doing business in Egypt, and that is how in the 1975 we became the major GM dealers in Egypt. This first dealership was the starting point of the Mansour Group.

There were many challenges because Egypt was converted from a public dominated economy to a private one and they were issues with foreign exchange, finding the proper management and building a sustainable business able to grow under challenging conditions. My brothers Ismail, Youssef, Yasseen and myself worked tirelessly to build the successful business that has become today.

Mansour Group is composed by 6 major Business Units: Automotive, which today is one of the largest GM dealers in the world excluding China. Mantrac which is one of the top 5 Caterpillar dealers in the World. Manfood, the Mcdonald’s operation in Egypt. Al Mansour Holding for Financial Investment, which operates Metro Supermarkets, consumer good brands and distribution channels towards Egypt. Mansour Maghraby Investments that operates Palm Hills Developments. Man Capital LLP that concentrates on the financial investments of the Group.

Growth is in the Mansour Group’s DNA. We see growth as one of the key indicators in sectors and geographies. We look to build a diversified portfolio of businesses with a good growth balance in sectors and geographies. Mansour Group’s turnover is around $6 Bls in 2018 and we are trying to target sectors in technology, education, healthcare and logistics in addition to our core businesses.

Competition is universal, and it isn’t different from any other parts of the World. I believe competition is positive in making the companies better themselves and increasing the quality of services and products they offer in all sectors.

We were one of the earliest companies in Egypt and in the Middle East to cross borders in the mid 90s and to invest in Subsaharan Africa by buying the Caterpillar business from Unilever in East and West Africa. Today the Mansour Group has offices in over 100 countries in the logistic business.

I was focused on building my own education: I received a Bachelor of Science Degree in Engeneering from North Carolina State University, then did my MBA at Auburn University and right after receiving my MBA was asked to be a faculty member at the University to teach finance and management classes.

My brother Yousseff Mansour and I are Co- Chairmen of the Mansour Group. Our responsibilities are Leadership, Strategy, Vision and Direction and is a constant working progress for a growing business.

Mansour Group is a Family Business that considers its main assets their own employees. Despite of the size of the company we still run the business with core values and principles of a family business.

What I can say because the Mansour Group is so diversified, the global presence differs from one sector to the next, but the Middle East has a considerable potential for growth in the different sectors we operate. We are continuously focused on the Middle East and we foresee a very important role to be present in the region.

As I mentioned, growth is in our DNA and we will continue to look for potential markets and sectors that we believe will have a growing presence in the World, this is our strategy and we provide the leadership to fulfil that Vision.

The Future of Education; One small shift for education, one giant...