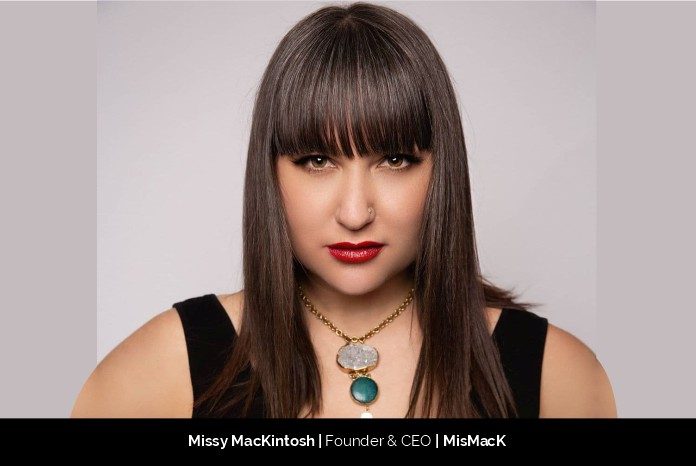 Having a fascination with makeup since an early age, yet discovering something spell-bounding and mesmerizing in each of the scattered components has not been a long-living hot topic du jour. But this has not been the case with the Founder and CEO of MisMack, Missy Mackintosh, who could be counted in the arena of exception pondering into a belief that the element of fun occurs when you harness yourself in the most unique manner. Missy shares her piece of memory that her mom never used to wear makeup, so she was always snooping through her friend’s mom’s makeup bag and used to attach herself with testing products on the back of her hand and discover the purpose of the component. She felt obsessed with the entire routine and discovery. Pondering at one of her past memory, she shares that, at the age of 14, my mom joined Mary Kay where I thought I died and have departed to heaven. After the woke of that incident, I was known as the makeup girl who everyone turned to for makeup advice and fun applications. When I discovered I could go to school to become a makeup artist I was all over it. – she added.

Missy has had a strong connotation on the verse of how makeup is perceived. She states that she loves how makeup is a tool of empowerment, designed to bring out people’s beautiful features, but she also loves how it’s another variant of art where the face is a 3-dimensional canvas and you can leave a memorable impact that could last forever. If you believe that the most beautiful makeup of a woman is cosmetics, a woman can turn your face outward with her passion, yet cosmetics are cheaper to possess. Missy has a long exposure in the passion of her industry with a tail of expertise over 16 years and counting. Her accolades have been under the impression and featured in the Huffington Post, Cosmo, Daily Mail just to name a few.

The unified tone of Success:

If you contemplate any format of business around you, you would see the glory whose shine blinds you when it is falling behind your eyelids but the understated portion is that nobody builds businesses, they build people and then those people build the business. Missy has never schooled herself formally nor has she pursued any academic pursuit on business courses or entrepreneurship programs. She has entirely schooled herself with the power of search engines commencing from brand designing, packaging sourcing, down to bar codes, rules, and legal formulations, digital and offline marketing to the final launch of the product. Missy launched her product GlitterEnvi at first to gain traction as she dreamt to envision MisMacK to be the first brand in Canada to offer an ecofriendly cosmetic glitter at a retail level. After the launch of GlitterEnvi, there was a cloud of questionnaire surrounding her mind but among that was a big question mark, ‘now what?’. The range of variants being offered by MisMacK has only been on the market officially since May 2019 and when COVID-19 hit, Missy wasn’t too sure if her venture would survive among the failing economy. She transformed her thoughts to became incredibly resilient, enlightened herself to pivot quickly, and adopt new techniques to connect with her community interested in a similar niche. At present, after ducking unending boulders, Missy is proud to confess that MisMacK is not just surviving but thriving.

The Science of Woman’s Cosmos:

Makeup is malleable and mercurial denoting that the essence of being in the stigma of clean beauty is not just the trend but the gateway of the future. Missy, through her venture, claims that she has already started to witness the change within the global community wherein her clients are directing their respective artists to fill-in cleaner products in their kit as the consumers are becoming more aware of toxic ingredients that being discovered in mainstream products. Missy also states that Clean is still not well understood or perceived. It requires more education and research. Again, referring to our T.E.S.S. (Transparency – Ethics – Sourcing – Sustainability) as a reference through her venture is a reflection of her vision that she stands by. Missy is a hardcore believer that “Makeup Does not Define you, It’s merely a tool of empowerment”. Her venture is thriving to become a leading example and re-create the realm of the Clean Beauty revolution through her offerings and contribute in truly making a difference in this world, one eco glitter at a time. – She added.

The Ignition of wearer and observer:

Makeup can allow you to dwell and capture a moment that is unforgettable. Missy’s journey has quite been the same as resilient. In her pearl of wisdom, she states that I’ve discovered that no one else will build your dream for you. It’s you who has to create it and build it. If you want it bad enough you will figure out a way to make it happen. Having more than 16 decades of professional growth, she has worked in the designation of management for organizations such as Make Up For Ever, Nars, and Shopper Beauty Boutique. Recounting her accolades, she shares that her biggest achievement was to bag the winner position of Season 5 Shuswap-Launch-A-Preneaur in March 2019. A few months post, she was invited to a gift-giving event in honor of the MTV Movie Awards in Beverly Hills where they stole the show in a tumultuous manner. She was the top 5 Best Youth Entrepreneur at the 2020 Small Business Awards the following year. The final accessory that she is most proud of has been thriving through a global pandemic. Having such an amazing response to our products and our brand landed us a win at the Global Clean Beauty Awards for Best Eye Shadow during Covid, beating out a global competitor. The Clean Beauty Awards are known all around the world for awarding the absolute best in clean beauty with judges in Europe, North America, and Australia. We hold with this title with at most honor. – Missy added. Upon envisioning her future blueprint, Missy enlightened us that MisMack’s roadmap ahead is to organically grow within Canada/US focusing on E-commerce/Education/and wholesale accounts. We’ll also be striving to create a MisMacK Makeup Artistry Online Education Training Program so that we can empower makeup artists from the comfort of their own homes, no matter where they’ll be located.