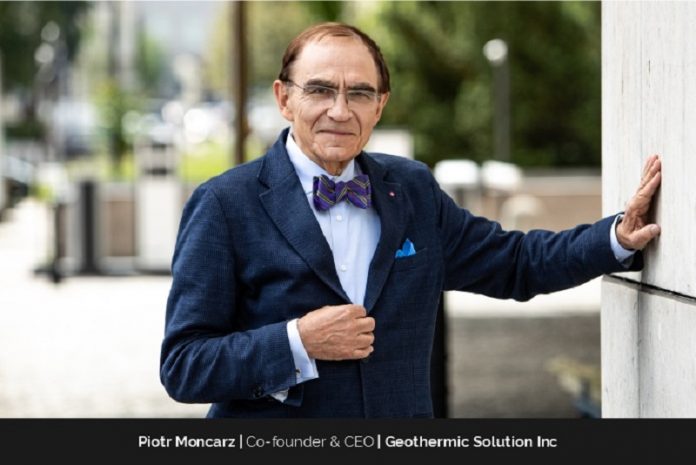 Dr. Piotr Moncarz is the CEO of Geothermic Solution, the company behind a technology that safely and efficiently harvests GeoHeatTM from deep in the earth’s crust. Dr. Moncarz describes the role as “the greatest opportunity and challenge of [his] professional life”—strong words from someone with decades of leadership and engineering experience. “Leading an endeavor that is poised to make a such an impact on the energy world is incredibly exciting. GeoHeatTM is the purest and most benign form of energy supply, available all the time, inexhaustibly, anywhere on earth,” says Dr. Moncarz, an adjunct professor at Stanford University, and a member in the National Academy of Engineering.

Dr. Moncarz credits a rigorous engineering education and years of exceptional mentorship with preparing him for his current role. “I have been fortunate to have many teachers in my life whose evaluation of my work was highly informed and reliably honest. There have been more formal benchmarks, of course—corporate roles, an adjunct professorship, membership in the National Academy of Engineering, and leadership in meaningful international programs. But my desire has always been to do things outside of the box, and to learn from these experiments and lead others through them, rather than resting on more traditional accomplishments.”

Upon completing his Ph.D. in engineering at Stanford University, Dr. Moncarz joined an ambitious boutique consulting firm called Failure Analysis Associates (known today as Exponent) that grew to become a world leader in scientific and engineering failure prevention and investigation. “In Silicon Valley,” observes Piotr Moncarz, “the road to success is paved with failures. What better way to walk that road than by studying others’ challenges and missteps? It has been an incredible education.”

Exponent is known for targeting complex problems through the teamwork of top-notch experts. When an opportunity came to address one of society’s most pressing needs—clean, sustainable energy—Moncarz knew that his decades of training among the world’s premier problem solvers would equip him for the challenge. “When GeoHeatTM presented itself as the most promising energy source for the foreseeable future,” says Moncarz, “I made bringing it to fruition the goal for the rest of my professional life.”

The emphasis on teamwork in his work leading up to Geothermic Solution prepared him to assume a high level of risk and responsibility for the venture’s success without getting tangled up in his own ego at the company’s expense. “In a small, dynamically growing company with unlimited market potential, a CEO must believe in his team members, rely on them, and be the sounding board for their recommendations, “ says Dr. Moncarz. “Build on what you know and let others do the same. Learn from them and share your knowledge. If that covenant is broken, you are no longer empowered to lead.”

Bringing the Heat to Surface

Energy security considerations have driven wars for centuries and continue to tie policymakers’ hands when dealing with despotic regimes. Making energy extraction local to every country, every region through GeoHeat extraction could free many parts of the world from toxic geopolitical relationships.

Meanwhile, the need to combat the environmental effects of fossil fuel dependence is becoming ever more evident and urgent. Clean, renewable energy sources like solar and wind are helpful, but they are also intermittent. GeoHeat, by contrast, is available 24/7, making it an ideal provider.

Geothermic Solution has developed a technology for harnessing geothermal GeoHeatTM from the earth’s crust at a depth of three to seven kilometers, where the rock temperature runs 300°C and above. Geothermic Solution’s closed-loop system is predictably steady, with a negligible environmental impact beyond installation. It does not need water, nor does it extract matter, liquid or solid, from the earth. Instead, it delivers heat to the surface from the endless supply present in the rock formation directly below us. Importantly, Geothermic Solution’s GeoHeatTM harvesting is also free of the major drawback of conventional geothermal energy extraction—reliance on large reservoirs of hot water deep underground, which are found in very few places and often rapidly depleted.

“Ubiquitous and safe, GeoHeat energy is poised to become an essential part of our national energy security and the energy supply of choice for many off-the-grid installations,” says Dr. Moncarz. “In addition to removing a major source of global conflicts, a new energy source can improve our food supply system and stabilize access to electricity in even the most remote communities. The possibilities are extraordinary.”

Geothermic Solution’s immediate priority is completing the installation of a commercial-scale GeoHeatTM harvesting system at a site in California. The company then plans to expand its first site and develop many others— a process that requires building multiple partnerships (special purpose vehicles, or SPVs) that secure access to sites, financing, and energy off-take contracts.

Going international will be a natural next step. Dr. Moncarz notes that the Kingdom of Saudi Arabia has one of the best GeoHeatTM formations in the world but continues to burn its exportable treasure to get electricity, desalinization, and domestic cooling. Japan, which has ample hot rock available at relatively shallow depths but relies almost entirely on imported fossil fuels, would also benefit enormously from Geothermic Solution’s technology. “We also see expansion into Singapore, and into Hawaii. As the tools specific to our technology get better, we will be moving into Europe and other places with hot rock at a greater depth.”

Crucial to all these plans, Dr. Moncarz emphasizes, will be the recruitment and engagement of passionate and highly-skilled professionals to continue and expand the work of the last decade. Dedication to the company’s long-term mission is essential, as is best-in-class talent. “We are committed to doing a good thing well,” says Dr. Moncarz.

Vicky Wang – A Collaborative, and Inclusive Educational Leader Changing the Face of the Online Education Industry Through Innovative and Empowerment

Lindsey Kay: Serving to Improve the Lives of Military Veterans with an Innovative Approach

The 05 Most Influential Women in Healthcare to Follow, October 2022