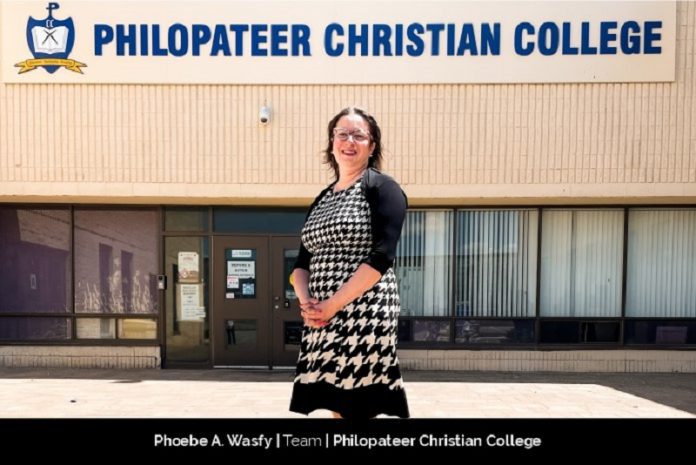 Exceptional educational leaders that lead with faith, belief, and persistence, can transform young lives and set them on the path to success.

Inspiration comes in many forms. Many of us have been inspired by family members or by school teachers and mentors who believed in us. Educators are a huge source of inspiration for many young people as they are often the first people who plant the seed of self-belief and confidence in our life journey.

Phoebe A. Wasfy, Principal of Philopateer Christian College is one of those remarkable women and exceptional educators responsible for transforming many young lives.

Building on her family legacy

Phoebe was born in Alexandria, Egypt, and immigrated to North America at the age of nine. Her love for academia and teaching was inspired by her grandmother, who was also a teacher in Egypt.

“Since a very young age, my dream job and only job I ever wanted, was to become a teacher,” she says. “It was my grandmother’s vocation, and I saw the passion she had for education, and the impact she had on her students, years after they left her classroom. I have always strongly believed that if it were not for teachers, there would not be any other profession in the world.”

After pursuing her studies in Education and starting off as a grade three teacher, Phoebe’s passion for the field grew over the years and she quickly moved up not only in the educational world as a teacher, and then in administration, but also as a life-long learner.

“I began my journey at Philopateer Christian College in 2005 as a grade 3 teacher with fourteen students,” she recalls. “It was then that the principal at that time began to see in me leadership, and hence began to move me into different roles in the school, while continuing to be a teacher. The following two years I moved into middle school and then the journey of expanding our school to include the high school began. We had three students in our first grade nine class and two students from grade 8 reaching ahead.”

Educational leaders must be life-long learners

Phoebe graduated with a Bachelor of Arts (BA) in History and Religious Studies from the University of Toronto in 2002, and completed a Professional Program in Education from D’Youville College, New York, USA, in 2004.

Along the way, she acquired additional qualifications in Reading, History, Religious Studies, and Teaching Kindergarten-Grade 12, as well as completing her Principal Qualification Courses (PQC) in 2011. Phoebe also received her Master of Education (M.Ed.) from the University of Western, Ontario in 2014, and completed a Higher Education Teaching Certificate from Harvard University, USA in 2019.

“With every step in the ladder came an additional qualification course or a Master’s Degree, or a Principal Qualification program, Certificate of Higher Education from Harvard, and currently the Supervisory Officer Qualification Program,” she says. “As an educational leader, I firmly believe that in order for one to succeed in such a great vocation, one must be a life-long learner themselves.”

Today, Phoebe is an active member of the Ontario College of Teachers (OCT) and the Ontario Principals Council (OPC). She was also nominated for the Order of Ontario in 2019 and 2020, one of the highest recognitions for community services awarded by the Province of Ontario and its Governor General.

“I remember the day we had our first inspection from the Ontario Ministry of Education and the moment we received our first accreditation, it was a day that has been carved in my mind forever, a small seed that I was honored to see flourish over the years. Following that, I began my journey of high school teaching and began my journey to the administration side of education at the same time,” she says.

2019, 2020, and 2021 were years of celebration when PCC won the title of Best Private School in the City of Mississauga. For Phoebe, every small step along the way was a celebrated achievement.

“Some of my proudest moments come every June when I stand on the stage and watch our graduates file down to their seats. I celebrate each one of them as an individual success story and I make sure that our school is celebrated through them in my speech,” she says.

Phoebe’s love for academia and her active involvement in the field has earned her many awards including the Arab Women of Excellence Awards in Academia from the Life Transformation Academy in Calgary, Alberta in 2019.

She was also inducted into The Marquis Who’s Who in America, in recognition of her professional integrity and outstanding achievement in her vocation. In addition, she is the recipient of the Vision Builder Women of Inspiration Award 2021.

Phoebe is a board member of ACSI-Eastern Canada since 2017, and an adjunct Faculty for the Youth Ministry Certification Program (YMCP) offered by the Canadian Coptic Center in affiliation with YouthTrain, New Zealand.

She was chosen to participate in the World Youth Forum 2018, in Sharm El-Sheikh, Egypt. She enjoys interacting with other educators, students and parents, and is committed to fostering leadership and professional development amongst her staff.

Phoebe heads many initiatives and is responsible for her school youth missionary trips globally, while partnering with other governments, worldwide charity groups, and global aid organizations. She recently initiated the first fundraising initiative led by a group of 16 and 17-year-old students for the Egyptian presidential initiative, Decent Life.

Investing in her students’ success

As an educational leader over the years, she has invested in the success story of hundreds of students. She firmly believes in investing in the education of students, not just through the strong academics that the school offers, but also through building well-rounded students on every level.

“As an educator, I lead many humanitarian trips where I bring students to places around the world to help give them a world view and empower them to make a real difference,” she says.

Over the years, Canada has been in the top countries in the world for education and the province of Ontario has been on top in Canada. As a private educational institute, PCC has always believed in staying on top of every possible educational program that would ensure their students’ success.

When COVID hit the world, PCC adopted online learning as an opportunity, embarking on a new venture of starting their virtual campus. They embraced students from all over the world, heading wholeheartedly into what Phoebe refers to as “the new world of Education” that brings students from around the world into PCC’s educational world.

“It was not just jumping on the idea, but refining it and ensuring that the students who join us get the full experience and the proper academic preparation needed to embark on their future educational endeavors,” she says.

The mission at Philopateer Christian College is to educate and empower young people, transforming them into individuals in whom spiritual, academic, and physical attributes complement each other. The keywords in their vision and mission are: educate and empower, transformation, well-rounded leaders of tomorrow.

“Every day that a student from Kindergarten comes in to show us their names that they wrote for the first time, we celebrate as a big achievement,” says Phoebe. “Every day is a day of achievement for me as an educational leader in the place of educational celebration called Philopateer Christian College.”

Nurturing the students’ God-given talents in the right environment, along with guidance from highly qualified teachers, all work together to create an educational environment for their students.

“Through Jesus Christ, we succeed in changing lives,” says Phoebe. “Our vision is to prepare our students to become well-rounded leaders of tomorrow, following in their Master’s footsteps. We do this by helping them believe in and develop their God-given talents in the right environment, guided by highly qualified teachers.”

A resilient leader with an empowered team

Phoebe believes that challenges are what make a leader a story of success, and that people only see the successful person when they reach the top of the mountain, but tend to overlook the perseverance, the hard work, the sacrifices, the discipline, the risks, the failures, and the doubts along the way.

“Success to me is the ability to work hard, persevere under pressure to push forward when the going gets tough and celebrate every step taken to reach the goal. Success does not come overnight or from thin air, but it comes with hard work, perseverance and faith,” she says. “These and more teach us to be stronger and push us to leap over roadblocks.”

She does not consider balance between her personal and professional life as one of her strong suits, but believes in her team as a vital part of her success story and always looks for ways to motivate them.

Phoebe believes that saying thank you, recognizing small or big successes, and working together as one with a common goal are what helped them move forward to become the school they are today.

Every morning she begins her day with a verse of the day and a reflection that goes out to all her staff. “We start off with the devotional message that I send out every morning or arranging staff building activities and events,” she says.

Once that is done and her day begins, Phoebe heads to school where she visits classes and sees what needs to be done, greets her staff and students, plans meetings and begins her communications.

“My days at PCC are never the same and I always say there’s never a dull moment at PCC,” she says. “Today, as we embark on the new world of education, I dream that PCC would continue to expand worldwide and become an educational phenomenon that is spoken and taken as an exemplary institution in all aspects. As an educational leader, I dream that my faith in education and passion for it will help me make a real difference in the educational world.”