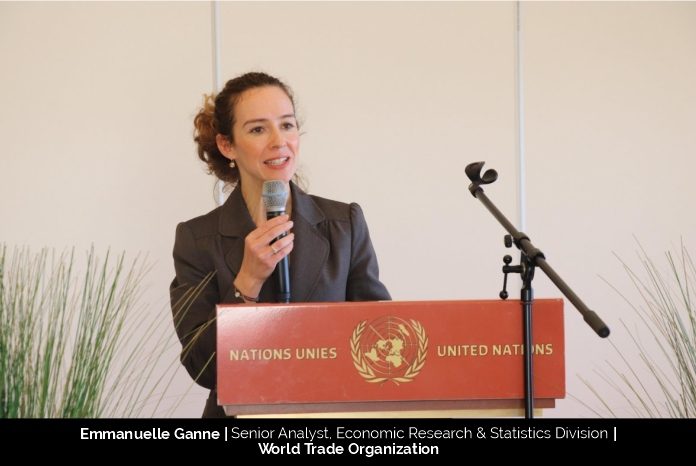 Trade is a key driver of economic growth. It has lifted millions of people out of poverty. However, trade follows quite a labor and paper-intensive approach. It is full of frictions and inefficiencies, which weigh heavily on small companies.

Being a seasoned international trade expert and blockchain enthusiast, Emmanuelle Ganne, Senior Analyst, Economic Research & Statistics Division at the World Trade Organization, is amalgamating technology with trade to reap good fruit for everyone. She knows the potential of blockchain and is pacing her way up in revamping the landscape of the current trading system.

A leader on a mission

Tapping into her colossal experience in international trade and wide skill set, Emmanuelle stepped into the domain as she realized the power of blockchain and DLT to transform international trade. She mentions that it can solve the double-spending problem, which impedes the move towards trade digitalization and is an all too common source of fraud, as recent scandals in the commodities trade sector in Asia have shown. It can break the silos that currently exist by allowing the various actors involved in trade activities to interact on a peer-to-peer basis, in quasi-real-time, and in a highly secure environment. It can replace the many handshakes along the supply chain with one global handshake, and it can significantly reduce frictions and trade costs.

The DLT and blockchain can bring trade digitalization to another level. However, she quickly realized that very few people around her understood the potential of the technology for international trade. For many, blockchain was equal to Bitcoin. As Arthur C. Clark said, “Any sufficiently advanced technology is indistinguishable from magic,” people don’t really understand the concept of blockchain. So, to become the voice of blockchain in the trade sector and make people understand the true potential of Blockchain/DLT for trade, she published her book “Can Blockchain Revolutionize International Trade?”

Redefining the blockchain industry at WTO

Redefining the blockchain industry for trade starts by following what’s happening on the ground, understanding the challenges, and taking a helicopter view to look at the broader picture to try and ensure that actors work in sync. It is about connecting the dots, facilitating a private-public dialogue to build the right ecosystem for trade digitalization.

The WTO is about making trade work for development and for the benefit of people. The new opportunities that blockchain/DLT open could be a game-changer for small businesses who face higher fixed costs than large companies that struggle to access finance, including trade finance, and are significantly impacted by burdensome trade procedures.

Trade involves many actors who have traditionally worked in a silo. Many wonderful solutions are being developed, but they are often focused on a particular sector. As a result, we have a digital island problem that impedes end-to-end trade digitalization. The WTO brings the bigger picture and can help connect the dots.

Evolving while climbing the ladder of success

Emmanuelle believes that challenges force a person to think out of the box and look at things differently to find new pathways and push boundaries.

She expresses that leadership is about adapting to change. However, a leader cannot force change. The biggest challenge is to create a desire for change where there is none or little, to incentivize, to create the space to do things differently, and to build trust. So, a leader should inspire, embrace and drive change.

She states, “Success is having a transformative vision and fulfilling it. It is about having an impact at a global level for the common good and about making a difference in today’s world. We live in a world that is changing fast, and as a result, the nature of leadership is changing as well. Leadership needs to be more dynamic, more responsive. Being a successful leader means being able to navigate this fast-changing environment and making a positive contribution to today’s world.”

Seizing the hidden opportunity in the pandemic

The current pandemic revealed the archaism of the trading system still largely based on paper, and it has given new impetus to trade digitalization. Adapting the digital workflow is vital to survive in the current circumstances.

Emmanuelle adds, “We saw banks who had resisted change going digital and taking action to recognize e-signatures to ensure that trade would continue flowing. It is now upon us to seize the opportunity and build the right ecosystem to make it happen.”

Bridging the gap between small businesses and trade digitalization

Being a Senior Analyst in the Economic Research & Statistics Division of WTO, Emmanuelle’s work follows a two-pronged approach. She leads work on MSMEs at the WTO where an Informal Working Group of over 90 governments strives to improve small businesses access to information, accelerate the implementation of the WTO Trade Facilitation. Agreement with a particular small business focus, facilitate small businesses’ access to finance and advocate for a greater voice for small businesses when trade regulations are being developed.

Secondly, she works with digital technologies, especially blockchain, to raise awareness of the potential of the technology and support the deployment of the technology in trade to the benefit of all, in particular, the small players.

She believes in developing an innovation-driven environment where everyone shares their amazing ideas and takes the lead on extra responsibilities to rise and shine. Her constructive feedback and regular appreciation for outstanding work also inspire them to succeed.

Being a mother, Emmanuelle makes time to imbibe all the essential values and virtues in her children to shape them for the future.

Even though her passion keeps her putting in extra hours to push a cause, she never misses keeping time for her family. In case the work files need her attention, she ensures to have dinner with her family and snuggles her kids to bed before attending the remaining work.

North star of her life

Her success depends on her contribution to build a better world till she retires.

For all upcoming leaders, she has a special message that states, “Be driven by your values, your passion, and your curiosity. This is how you will shine and excel.”

Why Now is a Good Time for Video-in-Email

Anna Lozynski: Fashioning Innovation as a Staple in Law & Business

The 10 Most Innovative Business Leaders to Follow in February 2022

Why Now is a Good Time for Video-in-Email