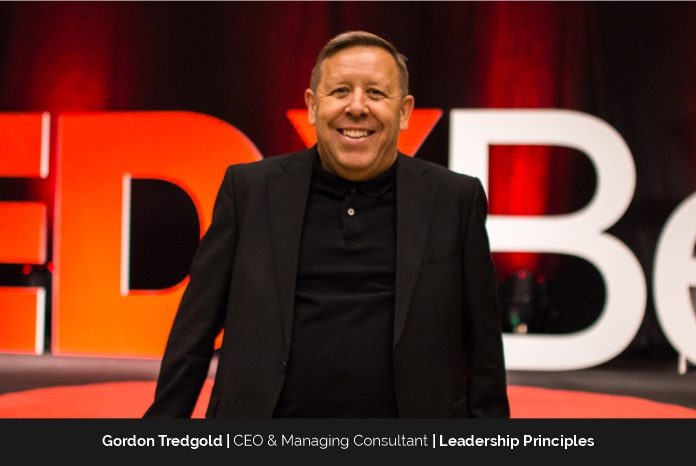 This goes beyond the age-old debate over whether or not leaders are born or made. As per Gordon Tredgold, leaders are made, not born. Gordon is the CEO & Managing Consultant at Leadership Principles Ltd. and has a passion for building successful teams, coaching and developing people, creating strategies to turn around under-performing teams and failing projects, and delivering complex change programs.

At Leadership Principles Ltd, Gordon focuses on helping develop people’s leadership skills, helping them go from being good managers to become great leaders. He has the practical experience of how to do this, having delivered $150 million programs, run $300 million departments, led 1000-person teams, and developed 100s of leaders. To do that, he offers training and coaching, and also consulting services to help leaders and companies with specific initiatives, setting strategies, or overcoming challenges.

Before Leadership Principles, Gordon was a turnaround specialist working in IT, leading complex projects and programs, and it was during this time that he developed the skills and understanding of what makes great leadership that he now shares.

Gordon likes to be successful and worked for too many bosses who were just role occupants who relied more on hope than leadership skills. That led to a lot of failures and poor performance, and that made him decide to set up shop, challenge the status quo, and try to turn things around. He did get a bit of push back, but in reality, many of them wanted to be in charge, but not accountable for the results, so they would often let him take the lead, knowing they had a scape goat if things failed. Fortunately, Gordon is great at problem solving, and team building (that came from sports) and he was able to actually improve the results and ultimately, he was offered their position.

He says, “Remember leadership is about action, not the role you occupy.”

One of Gordon’s challenges was that he was usually a little vocal, which didn’t make him popular, and leadership is sometimes a popularity battle. He says, “So to get ahead, for me, it was all about delivering results, taking on the tougher projects, the bigger challenges, and this was where I developed the reputation that made people take an interest in me.”

Gordon loved big challenges because they provided him more leeway in how he did things and the methods he took, which allowed him to hone his talents and advance his abilities. Also, when he was given greater and better chances, he was compelled to further develop his leadership abilities, because he couldn’t handle everything himself when the task was so large. He asserts, “At some point you need to make that transition from leading from the front to leading from behind; setting the budget for the department or organization, but also identifying and developing leaders who can assist you in delivering and extending and increasing your impact. It is tough though, because you need to give up control, share the glory and that can be tough, especially if you’re a winner or like to win. But this is what separates the great from the good, and why I say that leadership success is not just about what you do, but about what you leave behind and how well your teams perform in your absence. ”

As per Gordon, the one word that defines him it would be ‘FAST’. Gordon’s day is all about setting the tone for Leadership Principles by living the values. He works on developing leadership concepts, or simpler ways of sharing those concepts through articles and videos to help promote good leadership. Then the rest of the day is spent on training, coaching with clients or marketing.

The team has just created, and had certified by the Institute of Leadership and Management, its Breakthrough Leadership Training course, and Gordon will be looking to promote and give that around the world and at various companies.

Success that Make others Successful

In Gordon’s opinion, success for a leader is that when he/she leaves their team in much better shape than when they took it over. He says, “You have to develop a culture of continuous improvement, where the team shows initiative, strives to drive performance, and that they have the belief that they can do it.  To do this, you have to focus on developing the team, giving them the skills, tools, and confidence to be successful; such that their success continues in your absence. ”

He feels that if his team needs him to be successful, then he is a limitation and not a leader.

Gordon thinks good leadership has always been there, he has just made it easier for people to understand and helped identify the actions/approaches that people can take that will help them on that journey. He opines, “It helps you understand what drives you, and I think for me it was just being involved in teams that were under performing and deciding that I didn’t want to be part of that, that I thought we could do better, and that I could do better. I don’t always succeed, but I do always make things better. ” He has helped them see a simpler approach, one that they believe in, and when people believe it, it inspires them to take action.

Leadership Principles Ltd.’s core principles are FAST:  Focus; Accountability; Simplicity; and Transparency. These are deeply rooted in everything the company does and that keeps the team hungry and striving to improve. Gordon says that the team understands the benefits of great leadership, so that is motivation enough to keep it not only doing what it does, but to make great leadership simpler and more accessible to people.

As per Gordon, culture is development. It is a simple three step process. Say it, live it, reinforce it. He says, “So tell people what the culture is you are striving for so they understand what’s being asked of them. Then be the role model for that culture, show them what it looks like, and finally reward and recognise the people who live up to it, and this will reinforce the desired actions within the organization.” Gordon’s vision is for the company to become recognised as the premier leadership training consultancy.

Gordon emphasizes, “I’m proudest of the people we have helped to develop and who have gone on to be better leaders, because great leadership is a great enabler not just for the leader but the people they lead. Great leadership makes things better for everyone in their charge.”