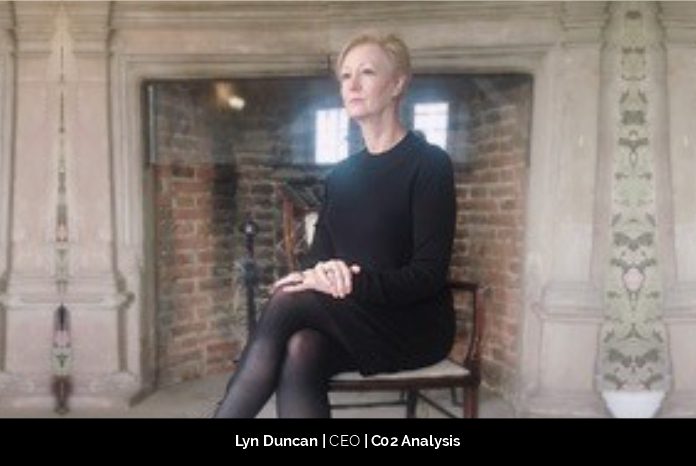 The value of an idea lies in the execution of its implementation. It is often debated that if you bootstrap an already existing technology whose young chapters are yet to be experimented and brought into the light, the connotation reaps your mind in the ability to bring it faster. Lyn Duncan who is the CEO of CO2Analysis shares with us, her journey of a bootstrapped Information technology institute. She has spent her prism mostly in the field of technology throughout her professional career and has had scooped her next big discovery from the oil industry, telecoms, software development, and the hub of IT. Lyn shares that her experience as a CEO of cloudBuy Plc which she has had partnered with her husband was involved in generating the portfolios of developing AI wherein calculating the product level footprints. It was then in the year 2019, they discovered that they have through their portfolio of technology can measure the level of carbon footprints seamlessly with an in-house practical tool that can assist in addressing climate change. This led to taking a subtle decision to buy out the technology from cloudBuy and focus on launching it in the market as a startup in the year 2020.

The Digital Boulder of Data:

Keeping akin with the accuracy of Artificial Technology is a huge boulder since it lacks artifice and thereby intelligence. There were such a similar set of boulders that slugged the vision of wherewithal. As exclaimed by Lyn, the creation of the first AI was a huge journey of 3 years that involved the KT joint venture between cloudBuy, Reading University, and Goldsmiths College, London with a gregarious team of 15 members. But, to illuminate the associates with the real-time data, the purchased data for 6 NHS Trusts spanning 10 different finance and procurement systems were the dirtiest data they have had encountered. The data took a span of approximately 180 days to produce clean and detailed research which finally welcomed a ray of hope for further action.

The scale of mess we leave behind is proportionate to the level of respect we have for others. The ordeal outcomes that we are leaving behind each day may be intangible for our bare pair of eyes but are tangible as a dark tornado for our future generations to witness and suffer. When major organizations witness the technologies revolving around carbon footprints, they just have ensconced their mind to these 3 scopes:

Scope 1: It is directly consumed fuel such as gas or petrol for a fleet.

Scope 2: It is electricity, steam, and other consumed energy.

Scope 3: It is everything else the organization buys.

If we trip down the focus one and two, that’s the safe arena for Government mandated reporting since the level of carbon footprints are reported at a decreasing rate but when we just contemplate on scope three, it is a hub of its own that spews an approximate of 90% of the organization emission whose measurement is beyond capable in a meaningful manner. But, with the AI tool built by her institution, the private sectors and the organization of the public sector can have a clear cloud analysis across the three scopes of the level of carbon impact being emitted by the products and services. By contemplating on the visibility in a detailed manner, the decision-makers are able to generate more ROI by taking actions on reducing them. Artificial Intelligence is almost a humanities discipline that is really an attempt to understand human intelligence and human cognition under the same roof. Upon reflecting on the barriers of competitors, Lyn states that they have discovered no competitors yet for their global solution but there is always a hungry clown ready to replicate something similar which can be a later definition.

The funnel of Prospects:

Data never fails to beat an emotion, it has been a similar rollercoaster ride with Lyn who believes that, in a startup, you get involved in every bit of everything wherein her major focus is concentrated on the sales and she looks forward to scratch the itch by boosting the bootstrap and develop her products and services in a fairly organic and reactive manner. In her pearl of wisdom, she expresses her joy by stating that interestingly during covid they have had the opportunity to directly engage with over 250 prospects in the UK and overseas and that has given birth to the creation of the foundation of the fast-growing business which she is forecasting to produce a pool of revenues in the ballpark of six figures in the year 2021 from the groundwork of 2020.

The Sacred devotion of Team:

An individual who is quietly confident transforms into a great leader for the generations to remember. Start-ups are barely accustomed to work-life balance as the swarming tasks wave within the distance of your eye lens and your retina looks like a crowded bridge during the early commencement months. During the recurring days of Covid-19, Lyn used to be on non-stop zoom meetings with her team but post a few months, the psychological storm of lack of human touch commenced bewildering the present. But this didn’t halt her process to march towards her vision and she claims to be practicing what she has preached intending to continue to do so.

One should not limit oneself as it leads your abilities to be drowned without creating an impact. Upon reminiscing the future goals with her institution, Lyn shares the blueprint in a subtle manner. She exclaims that many of her private sector customers are global with operations across the world, so she has been working to extend the solution to support different currencies. She also shared that her team is working with Health Care Without Harm and the WHO on a project to provide Carbon Footprinting to the BRICs and 6 other countries, largely based on the best practice work carried out with the NHS over the past decade. Along with this, her plan for global rollout is channel focused and she has her first partner aligned in North America and the Middle East as well as in the UK and Europe.  From her cloudBuy experience, she is going to take this steadily and consolidate her native market first, using the UK corporates with global reach as R&D and reference ability.

Indian Culture: the most amazing amalgamation