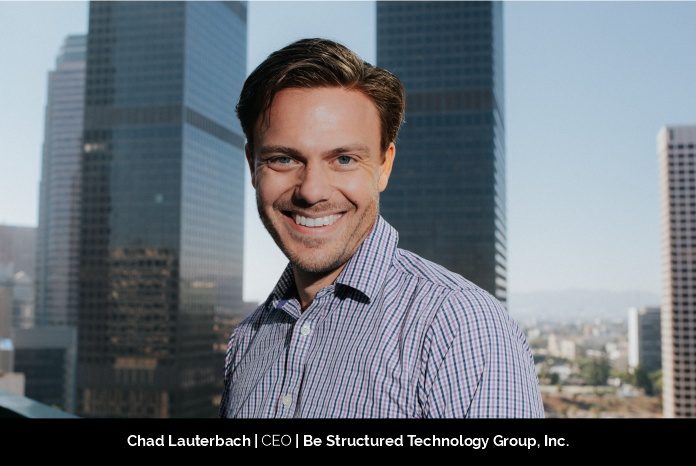 CEO of Be Structured Technology Group, Inc., a Los Angeles-based provider of Managed IT Services (MSP) and Managed Services Security Provider (MSSP) for small businesses, Chad Lauterbach desires to help small businesses better utilize technology by assisting in high level planning to make sure that new systems will benefit them both operationally and financially.

Be Structured Technology Group had a key turning point because of Chad’s drive and devotion. He says, “I am careful to implement and support systems using industry best practices.”

Chad has had several experiences as a leader that have made him proud. These memories have had a significant influence on him. Creating a community and a space that others want to be a part of has been the most significant to Chad.

Growth may be challenging when you’re constructing anything, and sometimes you need a critical individual to help you go to the next level. Chad Becker is that person. Be Structured wouldn’t be where it is without Chad Becker. He says, “Sometimes it’s not what you can do that advances a company but whom you choose to bring on board.”

Early Experiences, Learning and the Beginning of BSTG

Chad Lauterbach began his IT career at a life insurance firm when he was 14 years old. Chad’s career evolved and he eventually found himself working in IT for a logistics firm, where he began his journey into IT management. Chad began performing consultancy assignments on nights and weekends when new chances presented themselves. Chad quickly noticed that smaller businesses lacked high-quality IT help.

With a dream in 2007, Chad took a risk and started Be Structured Technology Group in his one-bedroom apartment. In the year 2021, Be Structured Technology Group is headquartered on the 22nd level of a downtown Los Angeles high-rise. Chad never imagined he’d be where he is now, working with 25 other people on Be Structured’s mission, coming from such modest roots. Chad thinks the worth of his clients, employees, and other vendors are at the heart of his success. Instead of focusing on the dollar, he believes in building an environment that prioritizes people.

“Tech is one of the fastest-changing industries. Staying on top of the IT trends is imperative to our business, so Be Structured can craft the best solutions that the clients want and need,” says Chad. He enjoyed taking apart and putting computers back together again from a young age. His great curiosity and drive to understand how things work allowed him to develop an interest in information technology. Chad, an entrepreneur at heart, realized that in order to fulfill his goals and aspirations, he needed to have a stake in something. Be Structured Technology Group was born out of his passion for technology and his desire to contribute to something bigger than himself. Chad now has the freedom to go where he wants and serve people in the way that he does because of Be Structured.

Be Structured Technology Group leads with a “people first” approach. The company states, “We pride ourselves on being a trusted technology advisor helping clients’ leverage technology to achieve their business objectives. When you choose us as your IT department, you are choosing a company that REALLY understands how to implement effective IT strategies and knows what makes small businesses and non-profits tick. That is the Be Structured Technology Group difference: we are more than just an IT services provider. We are a team of passionate people who love technology and possess the business acumen to ensure your IT is aligned with your goals”. The company’s goal is to altogether remove technology as an item of worry for its clients. The team at BSTG says, “Everything we do revolves around this focus – network monitoring, maintenance, support, helpdesk, antivirus, spyware, backup, security protection, virtualization, and business continuity. We focus on your IT, so you can focus on your business.”

Chad Lauterbach, a jack of all trades, finds himself working in many sectors of the firm on a regular basis. Chad is also interested in exploring new technologies, selecting technology providers, and recognizing emerging trends. Chad works as Be Structured’s most experienced senior-level networking engineer on a variety of projects for the company’s clients. Chad’s responsibilities don’t end there; he’s an expert at switching gears as he moves from CEO to CMO to CTO.

Someone like Musk or Dorsey, who can operate numerous businesses at the same time, are people business leaders aspires to be like. Chad founded Perforo, a crypto-mining firm, during Be Structured Technology Group’s formative years. Perforo failed despite his best attempts. Its failure was not a setback, but rather a challenge that Chad overcame and learned from. Chad gained a lot of insight into Be Structured Technology Group’s advancement to the next level as a result of Perforo’s collapse. People may also be a source of challenges. Be Structured has experienced two C-level executives who did not work out. Their departure taught Chad a valuable lesson about being cautious and methodical in hiring. He asserts, “Find the right person for the job; do not just focus on filling a role. If you don’t encounter challenges, you are doing it wrong.” Chad has had his fair share of setbacks and challenges in his life, all of which were hard in the moment but taught him to be a better business leader, a better person, and a better father.

“Tech at the Top”

Chad has worked in a competitive environment. There is always competitive motivation in what Be Structured does, from vying for clients with other businesses to working tirelessly to keep ahead of the curve with technology’s on-going advances. Be Structured is currently a mid-sized MSP business, which has its advantages in that it can serve a larger range of clients across a wider range of professions. Chad is a firm believer in and leader of the “tech at the top” attitude, which means Be Structured is a tech-first organization rather than a revenue-first one. Chad’s goal is to make sure that his team is properly sizing technology for his clients. Be Structured stands out because Chad is not only CEO and founder but a seasoned IT specialist himself and is very involved in the daily operations of Be Structured.

Chad firmly believes that life and work are closely intertwined. Life is work, and work is life. He says, “Work is part of life, and life involves work; work is not always in your employment, and there is life in your work.” Individuals, according to Chad, should construct their own lives, and a job is a part of that. The driving aspects that bind the Be Structured Technology Group team together include employee experience and company spirit. He wants his employees to feel valued at Be Structured, so he organizes team outings to Dodgers games and serves coffee for the entire office.

Chad Lauterbach was raised in the “American Dream” school of thought, which emphasizes how many cars you have, owning a home, and that coveted white picket fence. Chad learned that more of the “American Dream” wasn’t what life was about as he acquired “success,” prompting the question, “what is success to him?” Chad discovered that genuine success comes from helping build up other people. Chad came to a fork in the road where he had to choose between pursuing more of the “American Dream” or improving the world around him; he chose the latter. Chad is motivated by people, whether they are clients, vendors, or employees.

Chad’s advice to his younger self as he established Be Structured would be to not overlook his other skill sets. He wishes he had pursued his other interests, such as photography, philosophy, sound engineering, and running, more seriously. He has returned to such things later in life and wishes he had done so sooner. Chad would tell his younger self to never stop looking for answers and to enjoy life to the fullest. He says, “Embrace the stoic thought of ‘memento mori’ and remember you only have this one life to live, so live it to the fullest.”

Chad’s best advice to young leaders is to develop a firm that scales without requiring your presence. He claims that the first step to a successful business is to figure out what type of business you want to run, whether it’s a small shop or a large corporation, and then design a strategy from there. He adds that you shouldn’t put too much focus on profit and success; they aren’t the most essential factors. “There aren’t enough lemmings in the world to fill your pockets with cash.” He asserts, “There are many people in the world who deserve compassion, understanding, and care. It’s completely okay if you can give them a valuable product and they want to buy it. ” He also says, “If you have employees that want to work for you, that is great. Just remember to treat everyone with kindness and respect while you do business.”

Chris Gokiert: Driving Customer-Focused Digital Innovation With An Eye On What’s Next

Comprehensive Guide to Sales Funnel and its change mechanism