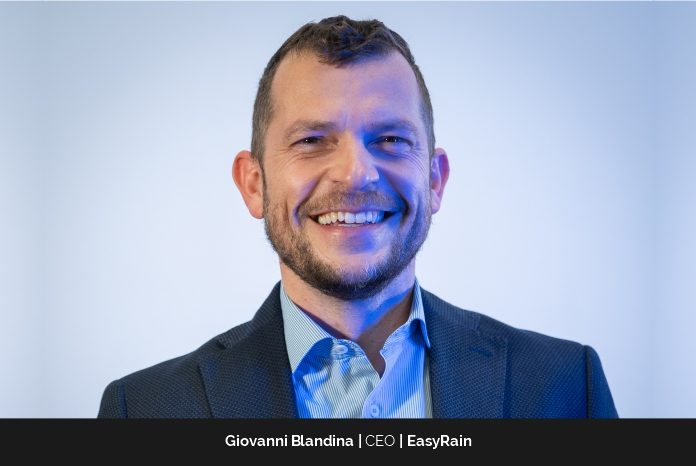 The automobile has been around for a little more than a century, and throughout that time, it has seen a remarkable metamorphosis, spurred by on-going technical improvements. Other components of transportation, such as extravehicular safety, signage, and traffic control infrastructure, have progressed at a far slower rate.

Giovanni Blandina, CEO and Founder of Easyrain, is developing the world’s first active safety system capable of combating the aquaplaning phenomenon and providing optimum driver safety. The technique is patented, and the Easyrain team is trying to improve the system. According to Giovanni, Easyrain can give autonomous driving a fresh and strong solution to achieve never-before-seen levels of safety.

Giovanni’s official start was the first significant capital increase (2018), which compelled him to take over the firm, which at the time had no clear vision for the future but was sailing by sight. The decision to rewrite the whole business case in order to make it far more ambitious was a successful but exceedingly risky task. He says, “I can’t clearly distinguish my best recognition, but I certainly received one of the most important from one of the most important mentors I met, Eugenio Razelli, ex-CEO of Magneti Marelli, who told me, after an important milestone reached at Christmas 2021, “Giovanni, what you are doing is not beautiful: it is touching“.

Giovanni’s job inside the firm is to promote the Easyrain team’s ethics, which can be summarised as a healthy challenge towards a recognised purpose, seeking constant personal progress without compromising on bad performance. This is done with the highest ethical regard for every individual, regardless of race, gender, or colour. Furthermore, his role is to assure firm growth by designing long-term growth strategies that ensure the potential of basing the company’s technology. The financial side is also crucial, and he works hard to maximise the firm’s potential in order to assure success in acquiring the required cash until the company is self-sustaining.

As for Easyrain, the team has tackled a problem (aquaplaning) that has existed since the automobiles were introduced. It was difficult to think that it could succeed where the great names had failed. According to Giovanni, Easyrain has overcome mistrust over time, and automobile manufacturers are now beginning to engage with it.

Another obstacle for Giovanni was forming a start-up with the objective of inventing active safety systems, which would need a large investment. Finding the funding to undertake R&D, staying in Italy, and having no aid channels was undoubtedly one of the most difficult problems he faced. Another risky, but successful, decision was to go in the opposite direction of where the car industry is investing: in an era of digitalization, software, and autonomous driving, Easyrain decided to create hardware systems.

One of the most difficult hurdles Giovanni faced was the realisation that no one felt the need for what Easyrain believed. This matured him, trained him to be persistent, and taught him to listen and be open-minded in order to change the company’s strategic direction. Nonetheless, the challenge of conducting interviews with people in the business became clear along the road. This forced Giovanni to get involved, to listen and to start growing the company, not taking into account the words of praise, but the “no” received. “Of fundamental importance was the ability to have managed to have people who taught me a lot along the way,” says Giovanni.

To Giovanni, success is doing something that can help improve the quality of life, both in terms of product development and also related to the development of the company itself. He says, “The awards we have obtained and the growth of the company’s credibility clearly prove we are on the right track. Setting up a mission-driven company is more complicated than a product-driven company, because at the beginning, you are alone.” He goes on to say that recognizing, after years of sacrifices, that you are no longer alone, but have significant credibility, is a clear symbol of acknowledgment and fulfilment, which is also reinforced by skills that the organisation may acquire from outside and bring out from within.

Giovanni’s goal is to assist his firm and his staff in reaching their full potential and pursuing personal improvement. Day by day, he makes it clear to his staff that they are not working on a project, but on a mission: to save lives and make driving safer. He opines, “Over the years, I’ve treasured my ability to listen to those who could share their skills, and I’ve made the most of meeting up with people who had something new to teach me. Each phase of my personal growth path is tied to a specific person who pushed me to get more mature, also with “strong” methods.”

A Sense of Sacrifice

Giovanni don’t think there can be a very good balance in all circumstances. There are also very long periods in which he is completely immersed in work, and others in which he can dedicate himself to family and passions. He says, “There is no particular strategy to keep myself motivated, if not the desire and the full conviction to achieve the mission for which I founded Easyrain.” This passion is the only weapon with which Giovanni tries to infect his team. “It is clear that in their case, I try to convey as much as possible the sense of sacrifice necessary to do what we are doing, but at the same time, also of pride in what they have already done,” says Giovanni.

There is already a long series of dreams that Giovanni has realized, both related to professional life and private life. Many of these are in some way related to the history of Easyrain. He opines, “I can’t see the end of my dream list, because once reached, they immediately transform into starting points for the next milestone.”

The automotive industry is evolving, and change may be terrifying. Giovanni, on the other hand, is ecstatic about this time because he feels that change equals opportunity. Easyrain has the potential to become a leader in the research and development of revolutionary safety systems over the years, and the fact that the first one the firm is creating will be introduced in a series in the coming years is an extraordinary personal success. Especially considering that at the beginning, the most generous feedback Giovanni received was “nice, but you’ll never make it” as the automotive world is inviolable. He shares, “Strongly believing in myself and in the possibility of succeeding has allowed us to make great strides, and that is why the only thing I feel like saying is that: you need to listen to those who think that your idea may not work, but you have to be persistent and strongly believe in yourself when your own has been validated. And despite everything, you are told that it will never work.”

Adam Kidan – An entrepreneur dedicated to making a difference with...

The 10 Most Successful Businesswomen to Watch, May 2022

Ellie Shefi: A Transformational Leader & Force for Good at the...