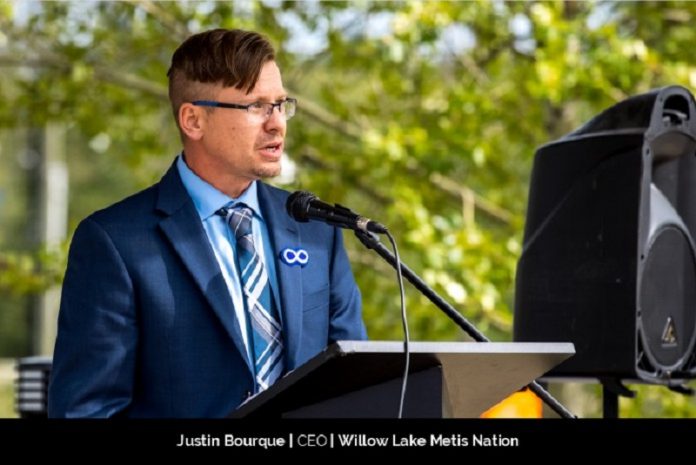 A great responsibility rests on the shoulders of Justin Bourque. As CEO of Willow Lake Métis Nation (WLMN), or Nation, he has to steer his community forward and inspire them to be the change they want to see. He is doing remarkable work. Under the leadership of Justin, WLMN’s journey to become a self-governing Nation is becoming a reality. In 2021, the flag of WLMN was raised in Anzac for the first time, which formally recognized the contribution of the Willow Lake Métis peoples. It now permanently flies alongside the Canada, Alberta, and Regional Municipality of Wood Buffalo flags in Anzac.

Named one of Canada’s Top 20 Dynamic CEOs in 2022, Justin has an outstanding track record for success. He attributes his success to his drive and moral governance, which, he believes, also provide the foundation for their Nation’s success. Justin, however, does not like to rest on his laurels. For him, success is marked by continuous improvement. “If you’re not growing, you’re dying,” someone once told him, and he wholeheartedly believes that is true.

“If you want to succeed, you need to be innovative and have your eye on the future while acknowledging the teachings from the past and remembering to remain present today,” says Justin, who is motivated by accountability, transparency, and his people.

The forward-thinking Justin endeavors to be a visionary to his people, and he also makes sure that he is accountable to them. He is striving for his community’s prosperity while staying grounded culturally.

Raised in the traditional Métis environment, Justin is a third-generation owner of his family’s trapline. He is not just the CEO of WLMN but also works his trapline as his grandfather and father used to do before him. Justin’s family came to the Anzac area in the 1950s to work on the rail line, and they settled there in the 1960s.

“I’m fortunate to live in two worlds,” he says. “I’m a businessman by day and bushman by night. When I get home, I hang up my business suit and head on the land to practice my traditional Métis lifestyle.”

Justin also wears another hat. He is President of Willow Lake Métis Group, a separate entity owned by WLMN. It has the mandate to create and explore partnerships and business ventures supporting the WLMN. Justin considers himself fortunate to have the opportunity to build and nurture strong relationships and create meaningful partnerships that will help secure the success and self-sufficiency of their people for generations to come.

It is because of his forward-thinking mentality, he is motivated to bring new community-based services to the Nation, and his inspiration has been his people, those who came before him as well as present-day community members. A true leader, Justin is determined to protect and enhance the rights of his community and provide them the foundation to grow.

“I didn’t join Willow Lake Métis Nation – I was raised by it,” he proudly says.

WLMN is a Métis community whose citizens now reside mostly in Anzac, Alberta. Historically, the Métis community dates to the pre-20th century, and their roots lie in the history of the fur trade in Alberta and the economic and political circumstances that evolved during and after the fur trade.

The Métis community has always been a strong land-using community. Many present-day citizens were taught harvesting skills by their parents and grandparents who were highly experienced in hunting, trapping, fishing, and plant gathering. Justin points out that these cultural practices continue to be taught on traplines that have been in their families for several generations.

The WLMN community is connected through kinship, economic interests, and political ties with surrounding First Nations and Métis communities in northeastern Alberta. Justin says that they are proud to have forged several strategic partnerships to create revenue and job opportunities, spur community development, and secure their Nation’s future.

Willow Lake Métis became a self-governing Nation in 2020. Before that, its citizens felt marginalized from parent governing bodies who were not transparent or accountable. WLMN needed to ensure its voice was heard, by all stakeholders – Government and Industry alike.

“The response and engagement from all stakeholders to WLMN’s transparent and accountable operation affirms our decision to assert our self-governance. I am proud of my team and to lead the charge,” says WLMN’s elected vice president and CEO.

The self-governing Nation began with a belief that community is the core reason for the operation and a desire to effectively represent the rights of the WLMN citizens.

Justin explains that the WLMN is elected by its citizens to promote the Nation’s priorities for protecting the environment and strengthening the Indigenous community.

“Our core purpose is to be sustainable and integrated self-governed Indigenous peoples, and we aspire to be nationally recognized as the model Indigenous community,” he adds.

In order to become the model Indigenous community, the Nation, under the leadership of Justin, provides a variety of community programs that support community growth and development; maintain, identify, and support culture and citizen growth; and eliminate barriers in development. This is attained with the support of their seven pillars of governance: community relations, administration and governance, traditional land use and culture retention, environment, government relations, industry relations, and growth and equity.

“Our vision is laser-focused on operating through a structured governance of transparency and accountability and improving our community’s way of life and sovereignty through responsible leadership,” says Justin.

And he explains that the inclusion of the WLMN flag represents a willingness to work collaboratively towards further reconciliation and future prosperity for both the WLMN and all levels of government. It also affirms and honors that the land upon which the community of Anzac rests includes the WLMN.

From the very beginning, WLMN has operated through a structured governance of transparency and accountability. It aims to improve the community’s way of life and sovereignty through responsible leadership.  “That is our vision, and it is what guides us every day,” Justin says. “I believe that with integrity comes innovation.”

For him, collaboration is the key to encouraging integrity and continuous innovation. Justin firmly believes that one can accomplish more with others than they can on their own and the best ideas are created through collaboration, and hence, he encourages his team to think outside the box. He also reminds them that innovation does not always need to be complex.

Technology involves applying knowledge to solve problems, and the Métis peoples have been successfully doing that for generations. Under the “traditional land use and cultural retention” pillar, they document their land usage and land activities to support their cultural retention. Justin adds that they have created an extensive knowledge database within the entire organization, and this has proved to be invaluable on numerous occasions – especially when the importance of the land to their people has been challenged.

In 2020, WLMN saw significant changes in a very short period because of the Covid-19 pandemic. It was a time of personal challenge for Justin as well.

“For some, that meant loss of work, the inability to see loved ones, isolation, lockdowns, mental health issues, and more,” Justin points out. “Our goal was to support our community through these challenging times and to continue to progress our Nation toward self-governance and community prosperity.”

Throughout the pandemic, WLMN continued to grow as a community. In fact, the pandemic reaffirmed the importance of Métis peoples’ traditional way of life. Justin says that traditional land use and cultural retention have always been a large focus for their community, and, on several occasions, their community gathered on the land and practiced their traditional harvesting rights. Increased communications, community engagement, and enhanced support services were a focus throughout the pandemic. With a strengthened voice, WLMN was also able to work with local health authorities to ensure that rural Albertans had access to vaccination clinics.

Justin and his team have big dreams for their future, and every day they are getting closer to reaching them. Over the last three years, Justin and his team have been actively working toward realizing their vision to restore their historical bond with the bison and to provide opportunities for their citizens that will reap benefits for generations to come. Justin has complete confidence in the path they are paving and that it will lead to accomplishments greater than they could have ever imagined. It is because WLMN is an exceptionally aspirational and progressive Nation.

“This year, our ideas will be put into action with the groundbreaking of our exciting path forward: Sohkastwâwin,” says Justin. A Cree term, Sohkastwâwin means “the act of being resilient.” The initiative includes the acquisition of approximately 205 acres of land.

Proactively, WLMN is working toward resetting their ecosystem and providing their community a home for the first time. Justin points out that while they live in Anzac and reside along the shores of Gregoire Lake/Willow Lake, they never had land to claim as their own.

“We are thrilled to now underpin our self-governance model by bringing our community to our own land and building our opportunity from the ground up,” he adds. Sohkastwâwin has been in the works since 2019 and is the community’s way of taking climate action and ensuring a resilient Nation.

WLMN is working with the Resilience Institute, a charitable organization dedicated to climate change research and education that partners with local and Indigenous Peoples, to formulate a plan to revitalize, develop, and monitor the land. The Willow Lake area has been highly impacted by industry and there is much work to be done, Justin notes, adding that revitalizing the historic relationship between the bison and the land is key to establishing an ecologically healthy landscape.

“Bison are an important part of land reclamation: like the Métis peoples, bison are resilient,” Justin says. “As the Métis helped shape Canada, the bison helped shape our Canadian ecosystem.”

Initially, they plan to start with 20 heads; over time, with the help of their industry partners, they will work to get more hooves on the ground. Once the bison return to their land, Justin expects them to work with their Nation to reclaim it.

Sohkastwâwin extends beyond land reclamation, including plans for a local food source, community culture center, Métis housing, local power generation, and more. Justin and his team also have their eye on net-zero emissions, climate resilience design, and tourism products, with intentions to lead and develop at least one new technology, innovation, or energy source. As new renewable opportunities become available, they will have their ear to the ground.

“We are excited to provide these opportunities to our Nation, which have arguably not been provided to the Métis people to date,” Justin says. “Through Sohkastwâwin, we are creating an ecosystem of culture, food, and economy right on our very own land.”

Best Is Yet to Come

Justin is excited that their Métis community will no longer be landless. He and his team are also excited to contribute creative solutions to problems that not only affect the Nation but the rest of the world.

“Our resilience relies on building and maintaining valuable relationships. With the help of our partners, we will change the course of the future,” Justin says. “The best is yet to come for Willow Lake Métis!”