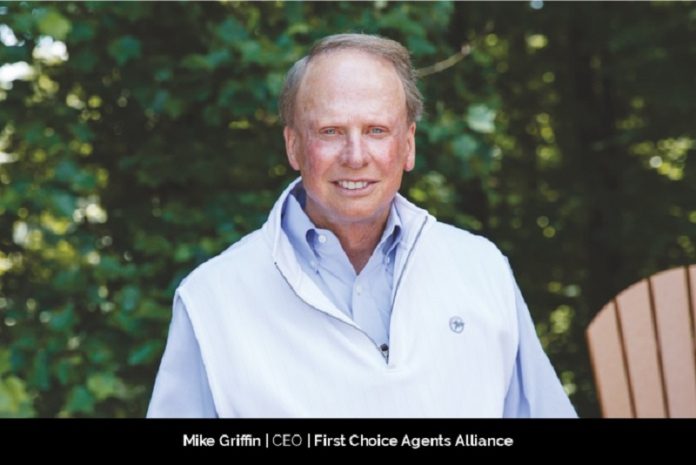 Under his leadership, these agencies have continued to grow, while receiving numerous industry awards and recognition by consistently ranking among the top agents nationally. In 2011, he was inducted into the Nationwide Sales Hall of Fame. Recently, Mike has been heavily involved in leading his newest venture, First Choice Agents Alliance to becoming a major player in the insurance aggregator space and is dedicated to building a quality organization for insurance agents throughout the US.

While still in school, Mike worked for his father in the HVAC business and also began working part-time in the jewelry business after school hours and on holidays. He developed a love of the jewelry business and pursued this after college, taking on the responsibility of managing a store for a small local chain. He was introduced to the insurance business by a District Manager for Nationwide Insurance who had moved into his neighborhood. Little did he know at the time that this neighborly relationship would lead to a major career change.

Mike had watched his father build his HVAC business from scratch and learned several valuable lessons about starting a business. One, you need a plan and you need to be willing to take some risks along the way to achieve your goals. In the insurance business, many times Mike has put this important lesson into action. Griffin Insurance Agency has been providing quality insurance solutions to it’s clients for over 40 years. With nine locations and over 50 employees throughout the piedmont area of North Carolina, the Griffin Agency has established itself as a trusted advisor for their policyholders in all areas of personal and commercial risk management needs. The agency prides itself on having highly qualified, licensed professionals to handle the needs of their clients. This has allowed the agency to consistently rank among the Top 25 agents within the Nationwide Insurance Companies.

Due to the success of the agency and increased demands of competitive pricing in the commercial marketplace, a need for alternative outlets for Workers Compensation coverage was becoming more apparent. After much brainstorming with Nationwide leadership, Mike proposed an idea to form a WC wholesaler to work with Nationwide exclusive agencies only, seeking to give them a better opportunity to serve their clients. In November 2005, Tarheel Insurances Services, LLC was born. Initially working with agents only in North Carolina, the success of Tarheel allowed it to expand it’s operating territory into 27 states, with agency relationships exceeding 1100 offices. Mike’s son Rob, has managed and overseen this growth from the beginning. Tarheel is committed to providing agents with competitive rates and industry knowledge that allows the agency to match their insureds to the carrier that best meets their needs. With a focus on controlling Workers Compensation costs, Tarheel provides client access to a professional staff that is conversant in every facet of the WC space. As a specialty broker, this has differentiated them as a go to provider in the business world.

Until recently, the retail agency, Griffin Insurance, was an exclusive representative of the Nationwide Insurance Companies. When Nationwide decide to change its business model, beginning first in 2015 by allowing their agents to represent other commercial carriers, a need arose to find additional markets to service their growing business markets. This was easier said than done and many agents found they could not support additional carriers. It was during this time that Mike was approached by many of his peers, based on the success of Tarheel and asked to form a wholesale brokerage outlet that Nationwide agents could go to for all lines of commercial coverage. So, in March of 2015, Mike and his son Rob, along with four of his highly respected peers in the industry, met in Washington, DC to discuss the idea. From this meeting was born First Choice Insurance Brokers, LLC.

First Choice Insurance Brokers was a solid idea. However, Mike and his colleagues faced unforeseen roadblocks during the execution of this business model. At the time, agents (all Nationwide exclusives at the time) were simply not ready or prepared to move business away from Nationwide, nor did they have the needed knowledge of other carriers to successfully represent them in the market. Although the brokerage unit quickly enrolled over 270+ agents, Mike soon realized the need for a change.

There was a need for more education in the carrier space by the agents, there was the building of trust with other carriers that these agents knew what they were doing and there was the needed recognition by the agents that they could be successful outside of Nationwide. Without this, the idea of helping agents benefit from added representation was incomplete.

After struggling with this business model for approximately 18 months, Mike had a chance meeting with Diane Wagner. Diane was a marketing representative for one of the carriers represented by First Choice and they began discussing the uphill battle the company had been facing and the timeline and needed additional capital that would be required for potential profitability. During the conversation, Diane asked if First Choice had ever considered a model of becoming an aggregator in lieu of a wholesale brokerage market. Aggregators help facilitate direct appointments for agents and then aggregate the producer volume to generate higher revenues. As the conversation continued, Mike discovered that Diane, (in a prior life) had been instrumental in starting an aggregator from scratch and served as its President for a number of years. Talks continued and Mike approached Diane about coming on board and helping change the current business model to that of an aggregator. Soon after, Diane was hired as the COO of First Choice Insurance Brokers.

In the fourth quarter of 2016, plans were developed for this transition and all 270+ contracts with the brokerage unit were cancelled effective January 1, 2017. This left the ‘new’ model to start with only the original 20 investors. The initial growth was slow due to the unfamiliarity of exclusive agents with that of an aggregator and how they would handle direct appointments from other carriers.  Still, that first year FCAA managed to enroll an additional 70 agents.

Today, First Choice has over 350 members and are already making noise as one of the largest networks in the U.S. based on premium volume. In support of their agencies, FCAA offers contract assistance, technology advice, educational resources and an experienced management team dedicated to helping agents find ways to maximize revenue. Additional sales support is also offered to each agency as needed, along with annual strategic planning to define and implement plans to achieve desired results. Their members can take advantage of top carrier alignment and superior compensation programs. FCAA is confident that these resources provide the member agencies with the road map to achieve profitable growth by utilizing industry standard best practices.

Networks can generally offer direct carrier codes with fewer volume requirements than what would be required of an agency on their own. These less restrictive requirements allow an agency to represent multiple companies that they might not be able to represent otherwise. The best part of an alliance with First Choice is the potential for additional revenue over and above what an agency might earn on its own and there are no minimum premium requirements, allowing agencies to earn growth bonuses and contingencies from their first dollar of premium production.

While all networks offer an advantage, an agency should consider several aspects before choosing an aggregator. One of the most important, is the carriers offered and whether these carriers fulfill the needs of the products that an agency wishes to offer. The agent needs a knowledge of the commission structure and should be aware of any growth and profit bonuses offered and at what level of production they start. Obviously, membership fees, monthly maintenance fees and exit fees are a major consideration. Then there the services offered, what am I getting in the way of support to make my agency better? The management team of an aggregator is a big piece and plays a very important role in a fruitful alliance. First Choice offers many services to the agent. They offer bi-weekly topical education sessions with a wide range of topics to help an agency grow its revenue. These topics can range from sourcing and hiring top producers, to keeping an agency safe from security threats and marketing in a new digital environment. First Choice area vice-presidents are there to help coach each agency with an individual strategic plan for growth. They follow Best Practices modeling to assist their members in creating a focus on the critical indicators that build agency wealth over time. They also spend a lot of time with agents on sourcing and developing new producer talent to work with the various carriers and vendors. They also offer advice on succession planning and their group is full of potential buyers when it is time to take that next step. First Choice feels this structure of services and support offer their agencies the best revenue opportunity in the market. They have the experience, knowledge and leverage to help agents to help agents build out profit centers in commercial, personal lines and life and financial services to create well-rounded agencies to fill the needs of their clients.

As an established entrepreneur, Mike encourages his team to always keep a 1/3/5 year plan in front of them. Their aim: continue to see controlled growth! Mike proudly claims, “Our model is for agents who believe what we believe and want to continue to see their agencies grow. We feel we can help them achieve whatever their goals are.”

Mike is also interested in the personal growth of his team. One of their goals is to ‘reinvent yourselves daily, not just when you realize you are losing ground.’ In fact, these are his thoughts on leadership – helping people excel in their chosen field with passion. He achieves this by instilling confidence in them to overcome adversity. He considers this ‘success’. Mike’s plans for the future of FCAA are to continue to grow responsibly and become the aggregator of choice for insurance agents throughout the U.S. All this while maintaining the quality and integrity of their organization.

Fortunate to grow up in area filled with sports activities, Mike developed a passion for winning. A passion that has stayed with him and percolates into his personal and business endeavors. This passion is infused in his leadership style and has helped shape his career.

Mike began his agency work in 1978, but at this point, his main responsibilities as CEO are to listen to his management team, offer advice and guidance and support them in their roles. Mik takes a great deal of pride in the management teams of each of his businesses. He knows that each of these teams are composed of a great group of individuals who do an awesome job.

This professional success has not come at the cost of his personal life. Mike enjoys a full and fruitful life, living in Cornelius, NC with his wife Cindy. They have three grown children, Meredyth, Robert and Courtney. Mike loves spending time with his family and also enjoys the lake, golfing and traveling.