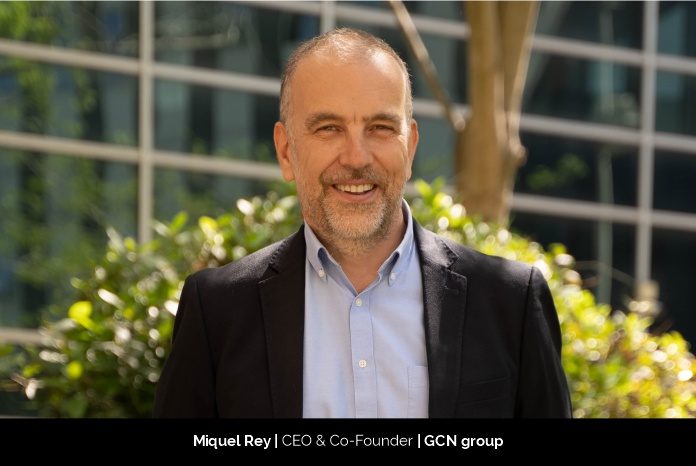 Defining an impactful business leader comprises many aspects to look after, not only their business’ success. The impactful leadership is followed by an idea, an inspiring vision that motivates the upcoming generation of business leaders. Miquel Rey is one such a leader, who has transformed an idea into a global B2B organization. He is the CEO and Co-Founder of Global Channel Network, the largest global alliance of B2B local IT distributors whose mission is to digitalize the IT channel using a global platform.

As a CEO, Miquel’s vision is to lead the B2B market in the IT sector and then extend it to other industries. He wants to reach countries that other networks are not able or willing to go because they are markets too small or unprofitable to establish themselves. He asserts, “Grow fast and with a highly scalable model both internally and externally.”

Miquel believes that when one has been an entrepreneur for many years, their mind develops entrepreneurship as a muscle, and it is constantly looking for opportunities.

His first entrepreneurial experience was 25 years ago when he sold an electronic banking service to an American company PSINet. After the acquisition, Miquel and his team immersed themselves in a merging process of about 10 other companies, bought throughout Europe by PSINet; it was the dot com era. His second company was created in 2000 and it had to do with online backup. It was very innovative at that time and he learned many things, like how to sell online services or how to create indirect sales channels. He asserts, “We developed our first management platform, which helped many customers and resellers to control thousands of low amount invoices each month.”

He further adds, “Once we had developed a good channel we created a new company, Acrosnet. At that point we already had a platform, resellers and an online backup service so we thought that we could create a 100% Digital Distributor to offer more services.  We are talking about 2005 and it was something very innovative at that time. The company was bought in 2014 by Westcon/Comstor, when we had an ecosystem of more than 600 resellers, 15 manufacturers, and 15,000 customers operating under a digital platform.”

After that, Miquel moved to Denver (US) to work for two years at Westcon and was directly involved in Westcon’s digital transformation process. It was the time when Miquel discovered the difficulty involved in the transformation of a large company. The difficulty of transforming these large B2B companies made Miquel analyse the B2C market; the Global Channel Network was born. The foundations of the Global Channel Network were set in Denver  and now he wants to take it back to the US.

GCN is a simple project to understand but very complex to develop. It is based in Barcelona, but  GCN is the union of 100 companies (IT Distributors), one in a different country of the world, and they are leveraging the same B2B software platform to work as a group.

It all started with a vision to create a global B2B platform that reaches all the companies and countries worldwide. No one has achieved that challenge before. Miquel says, “To begin with, we had to find a sector that could reach all the companies in the world, and ICT is probably one of the few that meets this requirement. But to reach these companies, we needed a network of resellers, the ones that talk to all these companies. We selected a target of 150,000 resellers, and to reach them in a global, safe, and relatively fast way, we needed to find a distributor in each country. One that already had a consolidated reseller network for many years.”

Miquel further adds, “Before we started looking for distributors to integrate and digitally transform them, we had to develop our Katy software platform. It was the first kind of platform in the market that contemplated five levels of participants in the sales process. The manufacturers, the distributors, the resellers, the purchasing people of the companies, and the employees of the companies, all connected under the same umbrella.”  Every time the company added a new distributor, it came with several contracts with IT manufacturers: companies such as Microsoft, Cisco, Acronis, Eset, Bitdefender, N-Able, Kaspersky. They also integrated them into the platform.

GCN integrates distributors, resellers, and manufacturers so all the participants in the channel meet digitally on one platform.

GCN is one kind of unique B2B platform with a global reach. And for future accomplishments, the goal is to be the first B2B platform in the world. After two years, the company has already been actively operating in 26 countries, and it is striving to reach 100 countries in two and a half years. “We want to close 2021 with 40 countries and to have near  20,000 resellers using the platform” says Miquel.

For Miquel, success is a feeling, and it depends on each one of us. People always associate success with money, but there are many more things that would fit perfectly with the word success: personal development, working on what you like, creating, and living happily. These are the things that are the most important for him. He states that true success is achieved when you can walk your own path. When you grow personally and professionally, facing new challenges, helping others in their path of entrepreneurship, and most importantly, when you have fun with your life project.

As the CEO of the company, Miquel leads the team and supports local distributors in different countries around the world in their process of digital transformation, He is also actively involved in innovation and relationships with stakeholders and major manufacturers. He asserts, “The word that best combines my qualities as an entrepreneur and innovator is perseverance.”

Enjoying both Personal and Professional Life

“It is always difficult to balance life” says Miquel. He adds, “I consider myself a lucky person, since my work is my hobby: creating new businesses, helping people to create them and see how they make them grow. I enjoy helping people, specially entrepreneurs.” In his free time, Miquel enjoys spending time with family, good friends, and steering his boat in the sea. He is restoring an old typical Catalan fishing boat from 30 years ago.

Learn Together, Grow Together

True growth happens when it is achieved as a team. When we create an environment where everyone learns and supports each other when facing many hurdles. For Miquel, the key is to get involved in the project and grow hand in hand with it. Diving into a project that challenges you continuously, creates the opportunity to learn and thrive as a business professional and as a leader.

Dr. Aaron Rossi: An Unconventional CEO Playing a Crucial Role in the Fight Against Covid-19

Kamyar Shah: A Supportive Expert with Deep Insight into Marketing, Sales, and Operations

The Most Extraordinary Business Women in Leadership, November 2021

Dee Armstrong: Improving Patient Services One Patient at One Time