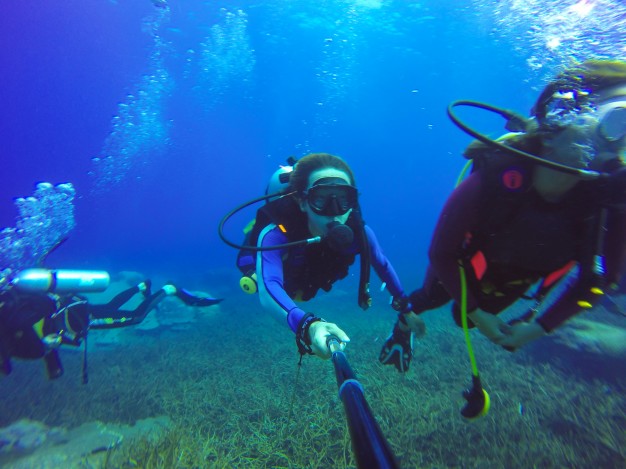 Who is a Scuba Diver?

Scuba diving is a mode of underwater diving where the diver uses a self-sufficient underwater breathing devise (scuba) completely independent of surface supply, to breathe underwater. The ones who perform such acts are referred to as Scuba divers. They carry their own supply of breathing gas normally called compressed air, which allows them longer underwater endurance. Scuba system circuits discharge the breathing gas into the environment as it is exhaled, and inhale the gas from diving cylinders which contain breathing gas at high pressure supplied to the diver through a regulator.

What is the equipment used for scuba diving?

Scuba diving isn’t an easy process and requires tones of equipment for the process, like

The designated equipment used by a scuba diver is known as scuba, which is the self-regulated underwater breathing device that is carried by the scuba diver and which helps him/her in breathing.

Breathing apparatus are many of three types:-

Cutting tools such as line cutters, shears, or knives are often fetched by divers underwater for emergencies like cutting loose from entanglement in nets. A surface marker buoy (SMB) is held by the diver conveying the position of the diver to the surface personnel. A surface marker also helps in easy and accurate control of ascent rate and very often stop depth for safer decompression. An emergency cylinder provides sufficient breathing gas for a safe ascent. In addition, divers may carry strobes, whistles, mirrors, lights, flares , or emergency locator beacons.

What are the different procedures adopted by scuba divers?

The underwater environment is a new, unfamiliar, and hazardous territory. In order to ensure safety, necessary procedures must be followed. Acceptance of responsibility for one’s own safety, attention to detail, and survival are the three most required traits. Most of the safety procedures are constructed to reduce the risk of drowning and are used to reduce the risk of decompression sickness.

The following includes those various procedures:-

What are the safety measurements for scuba divers?

The safety of underwater diving depends on four factors: the equipment, the behavior of the individual diver, the performance of the dive team, and most importantly the environment.

With the help of the scuba equipment, divers are allowed to stay underwater for a limited amount of time. The dependency on the equipment even for a short duration period is critical. A few types of equipment though allows the diver to operate with relative comfort and ease.

The underwater environment can try and impose severe psychological as well as physical stress on a diver, and unfortunately, this is something that is not under a diver’s control.

What are the certifications and training required for scuba diving?

Scuba training happens in presence of a qualified instructor who is registered with a government agency or represents various diver certification agencies. The basic module of diver training includes adapting skills for the safe conduct of activities in an underwater environment and includes strategies for the use of a personal decompression computer or dive tables for emergency self-help and rescue procedures.

A normal entry-level scuba diver will be prepared for:-

Tennis and the United States: two biggies in one

All you need to know about the American football

Led by a Vision to Build New Visions

Counterfeit Pharma: India and US