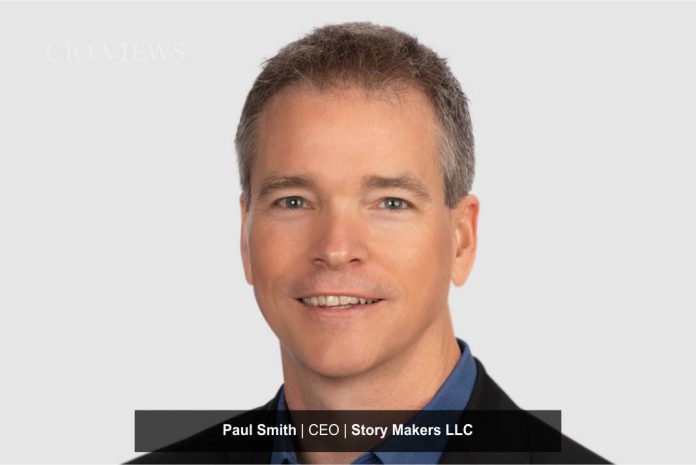 We all have a story however just a few have a story that will inspire. Paul Smith is one amongst them. A leading expert in business storytelling, Paul is the author of the bestselling book Sell with a Story. Other phenomenal pieces of his work include, Parenting with a Story and Lead with a Story which was a bestseller in Amazon’s Business Communication category. Paul is also a former consultant at Accenture and former executive and 20-year veteran of The Procter & Gamble Company. He delivers professional workshops and keynote addresses on effective storytelling for leaders and salespeople. As part of his research on the effectiveness of storytelling, Paul has personally interviewed over 250 CEOs, executives, leaders, and salespeople in 25 countries, documenting over 2,000 individual stories. It is our humble privilege, to cover the awe-inspiring journey of an influential yet down to earth personage like Paul Smith. As he shares his experience with us, we are certain that it will inspire us with innovative business insights and a new perspective.

What were your dreams and aspirations while growing up? What led to the foundation of Story Makers Group?

Well, my earliest aspirations were to be an astronaut, but my nearsightedness ended that dream by the time I was twelve. I went into business as a practical alternative. But I developed my next dream of being a speaker and trainer in my mid-forties when I realized my most rewarding days at work were the handful of days a year that I got to deliver a keynote address at the annual meeting or teach a training class for the new hires or newly promoted general managers.

I asked, but it turned out that out of the 120,000 employees at the company I worked for, not a single person had a full-time role doing either of those things. I realized the only people who did get to do those things full time were people who’d written a bestselling book and got invited to speak to and train audiences at companies all over the world. So that’s when I decided I needed to write a book. I just didn’t know what it would be about at first.

Storytelling as a leadership tool was the topic I was most passionate about at the time and that they didn’t teach me how to do in business school. So, I spent the next 2 ½ years researching that topic and interviewing hundreds of CEOs, executives, and leaders in 25 countries around the world about their use of storytelling. The result of that research became the content of my first book. And I’ve been writing and speaking about that topic ever since.

So, while writing books was the means to the end of becoming a speaker and trainer, I found out I absolutely love writing. So, now I can honestly say that I love everything about my job.

What were the initial challenges and setbacks that Story Makers faced?

Certainly, getting a publishing contract and landing my first few speaking clients were difficult. But the most insightful challenge was probably the first one – finding a literary agent who would represent me. I was turned down flatly by the first six agents I pitch my book idea to. Some of them didn’t even give me a reason. Just, “not interested.” Some gave me a few helpful hints: “Your scope is too narrow” or “it’s not original enough”. But the seventh agent I pitched it to said, “Maybe. Your proposal is good, but not good enough.”

That agent and his staff worked with me for three months, meticulously going over every word of my 35-page proposal (a typical length for a proposal). We went back and forth for three months making change after change, including major shifts in direction for the research behind it and the content the book would contain. And they never charged me a dime for all this consulting.

At the end of those three months, the boss looked at the completely new book proposal and said, “It’s still not good enough. Not interested.”

The next day I sent that exact same proposal to an eighth literary agent who signed me immediately. Within a week she sent that proposal to the first on a list of 10 publishers she planned to pitch the idea to, and that first publisher wrote me a publishing contract within a week. That book, Lead with a Story, has made it to several bestseller lists, is now in its 11th printing, and is published in seven languages around the world. And that seventh agent (as well as all six before them) missed out on a lot of royalty checks.

But the lesson for me was the value of perseverance. It would have been very easy, and understandable I think, if I had given up after being told no 4 times, 5 times, 6 times, or 7 times. Pursuing a dream takes grit. You’ve got to be willing to get knocked down and get back up. But you also have to be willing to learn from the mistakes that lead to getting knocked down. If I hadn’t taken all that advice from those agents along the way, that first book would still be just a dream.

Tell us in brief about the services of Story Makers

I deliver training, coaching, and keynote addresses on the art and science of storytelling to help people be more effective at their jobs. Whether that’s a business executive, salesperson, engineer, marketer, HR leader, etc. All of us are more effective when we tell more compelling stories.

What is the business growth strategy of Story Makers? How do you define the growth of Story Makers over the past few years? (Can be explained with statistical data too)

My business model is to spend most of my time researching and writing books on storytelling, but then make most of my revenues on the speaking and training engagements. Some speakers speak for free (or for cheap) so they can sell books in the back of the room. My strategy is the opposite. I write books people want to learn from, and then they hire me to teach it to them in a single day. I don’t enjoy marketing myself or making sales calls. I prefer to spend all that time researching my craft and writing books and let that be the driver for people to contact me instead of the other way around.

As such, I’ve had three books published in the last 7 years: Lead with a Story, Parenting with a Story, and Sell with a Story. And I have two more set to come out this year: The 10 Stories Great Leaders Tell and Four Days with Kenny Tedford. My plan is to have a new book come out about every other year.

What is the vision of the company and key factors that distinguish you from the lot?

There are other people who teach storytelling to business people. But most of them have little experience as a business leader themselves. And that matters. A lot of people can teach you the basics of crafting a story. Especially if you’re planning to write your first novel. But to help business people craft effective 3-minute stories, you need enough experience to know what kind of stories they need to tell in the first place.

Give us a brief of your life before Story Makers.

I grew up in a small town in Arkansas, studied economics in undergrad, then went to work as a consultant for what is now Accenture. After two years I left to get an MBA at the Wharton School at the University of Pennsylvania. Procter & Gamble hired me from there as a financial analyst, and I later moved into consumer research. I had assignments in increasing levels of management in several business units, manufacturing plants, and sales offices. My last role was Director of Consumer Research for a $6 billion global business unit.

Tell us about your roles and responsibilities as the CEO of Story Makers and how does it make you feel?

Technically, I’m a solopreneur – a one-man show. So, staff meetings are short. But I also have agents and partners I work with in various capacities. The feeling of independence and freedom is unlike anything I had in my corporate career before that. It’s both exhilarating and stressful. There’s no monthly paycheck to fall back on. But I can’t imagine ever returning to the corporate environment.

I don’t have employees. But my personal motivation, I think, is simply a result of the fact that I love what I do. I love the process of researching and writing book, I love teaching, and I love telling stories. And those are the things I spend my days doing. That’s why I left my cushy corporate job in the first place. I suppose one day if I stop loving those things, I’ll need to find a more contrived way to motivate myself. But fortunately, that hasn’t happened yet.

What does the future of Story Makers look like, globally? How do you plan to widespread the business?

I don’t have a plan for world domination, if that’s what you’re asking. Some months I have more work than I can get to. And I frequently turn down potential new clients either because I’m booked when they need me or it’s simply not a company I want to work with. So, growth is not my main goal. I do, however, have a goal to expand the circle of services I provide and topics I write about.

For example, I recently took on a client who instead of wanting me to deliver a keynote speech, wanted me to write a speech for one of their executives. They hired me because they didn’t want it to be a dry, boring, corporate speech. They wanted it to be a story. I hadn’t considered being a speechwriter before, but I accepted the challenge. They liked the result so much, they hired me back to write the history of two of their brands – again, as an interesting story, not a dry case study. So, that’s now something I might start doing more of.

I also have a book coming out later this year (Four Days with Kenny Tedford) that isn’t a book about storytelling at all. It’s not even a business book. It’s a biography about a 65-year-old, cognitively impaired, deaf man that I wrote just because I think the world will be a better place once they meet this incredible man.

I don’t know what new space I’ll drift into next. But I’m excited to find out.

Westfield: Advancing the property and casualty insurance domain with a customer-centric...