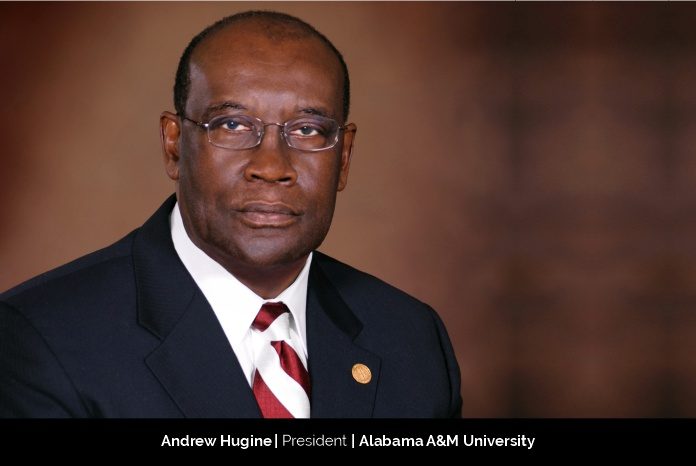 Dr. Andrew Hugine, Jr. (pronounced hugh-guinea) is Alabama A&M University’s 11th president. South Carolina State University awarded him bachelor’s and master’s degrees in mathematics, and Michigan State University awarded him a doctorate in Higher Education/Institutional Research.  He has talked about ways of expanding the number of minorities in STEM subjects at various professional gatherings and is the author of three mathematics textbooks.

Dr. Hugine has been the president of AAMU for over a decade and believes that students should look for a school that will promote and support them academically, socially, and through civic involvement. When it comes to AAMU’s future goals, he says the institution is now more prepared for the unknown in 2021 and beyond than it has ever been.

Make a Difference; Leave a Legacy

Dr. Hugine has always desired to work in education, according to him. His mother was a teacher, and he studied math education as an undergraduate at South Carolina State University. After graduating, he taught high school math for a year in Beaufort, South Carolina, before returning to his Alma University.

As per Andrew, success occurs when one is able to articulate a project with a goal objective and that particular goal project or objective comes to fruition. That is success, and it looks different for different projects. He says, “Success is kind of like a moving target. It’s not an absolute, it’s continuous improvement.”

Andrew considers success to be the ability to leave an entity in a better shape or form than when you discovered it. And, thinking back on his 12-and-a-half years at Alabama A&M University, he sees it as a success because it has evolved in positive ways since he arrived, and it is now better than it was.

Faith is the Ultimate Power

One word that can define Dr.  Hugine is an optimist. He says, “With having faith the size of a mustard seed, one can move a mountain. That is the definition of optimism.”

As an experienced educator, Dr. Hugine opines that challenges make one not only stronger, but also better. He goes on to say that the roadblocks are a powerful motivator that move us toward inventiveness. He says, “Challenges make you a more optimistic person because one of the things you must grasp about life’s obstacles is that they will come, no ifs, ands, or buts about it. You can’t alter the obstacles that come your way, but you can change how you react and respond to them.” He also feels that a positive mental attitude is essential for being hopeful and helps us to believe that no matter what challenges you face, you can overcome them. The ideal example of how adversity tends to bring out the best in people is the pandemic.

Dr. Hugine lives by the saying that you should never, ever allow one of those challenges, or hurdles go to waste; you always find a way to turn it into something good. He goes on to say that if you think about challenges and hurdles from the perspective of the concept of a half-empty and half-full glass, you will address challenges and hurdles differently. If the approach is half-full, your approach will be more optimistic.

Dr. Hugine began his career as a mathematician as an undergraduate. Then, he and other mathematicians calculated trigonometric functions and logarithmic functions by using a slide rule to perform the computations or by looking up the values of tables. However, technology has completely transformed schooling today. Today, these and other calculations are performed in a fraction of the time with the aid of high speed calculators and computers. When utilised correctly, technology may make learning more interesting and enjoyable. He says, “At AAMU, we invested in the use of technology and education even before the pandemic. It wasn’t because we wanted to; rather, it was a necessity. The progress we’ve achieved, the advancements we’ve made, and how we’ve used technology and the educational arena would have taken us years to achieve. And now you know that we’re looking at all new types of online instruction, such as hybrid and asynchronous, that we would never have accepted as quickly if it hadn’t been for that. As a result, technology allows us to accomplish far more than we could previously.”

The Pandemic Impact on Educational Progress and Development

“The pandemic has tested our inventiveness and adaptation to ensure that we can continue to give the same educational level and quality of delivery as before,” says Dr. Hugine. Alabama A & M University deserves credit for turning so swiftly to do this, and it was prepared.

Dr. Hugine believes that the university is far better equipped than some other schools since it has made considerable technological expenditures prior to the pandemic and had many of the technologies already in place. According to him, technology infused educational components are required for success. As a result, it had an impact on the university in terms of encouraging it to innovate and adapt to the new climate in which all educational institutions now find themselves.

Being a University President

Dr. Hugine’s role as president requires him to connect with a variety of constituency organizations. He’s also required to react to any challenges or concerns that may emerge. A president must likewise think strategically about the future, or where the institution is going, and how to put together the resources, both human and financial, and bring them to bear on achieving the university’s goals and objectives.

He states, “The President also serves as the university’s public face, and whatever the President does, or does not do, reflects on the university. For individuals that want to be a president, I tell them, you give up your individuality when you become president. One can’t separate the two because one doesn’t end up being president, from eight to five.  Even if you’re shopping at Walmart for personal items and someone approaches you, you’re the President, and you should have that discussion, because at the end of the day, what people see is the president of Alabama A&M University, not necessarily what you’re purchasing. “

He also adds, “A president is also an ambassador. As a result, as an ambassador, you must always ensure that you are growing. And you should strive to convince people to like the university rather than you.”

He was President of South Carolina State University before coming to Alabama A&M University. Other higher education positions held included Interim Executive Vice President and Chief Operating Officer; Assistant Vice President for Academic Affairs; Director of Special Services Program; Director of the University Year for Action Program—a service-learning program; Research Fellow; Assistant and Director of Institutional Self-Study; Professor of Mathematics; and high school mathematics teacher. Hugine has been recognized both nationally and internationally for his leadership in education and adept administrative skills. Dr. Hugine was appointed as the president of the historic 145-year-old Alabama A &M University on July 16, 2009.

Andrew believes in working hard, but he also believes that one should be able to turn it off. To be effective, there must be balance.   He says, “I try not to take my work home with me.” And while at home, he doesn’t spend his entire time working on the project. He makes every effort to lock the door at the office and go, rather than working these long hours. If you become a workaholic, at some point you lose your effectiveness and you get less and less accomplished.

Andrew learned early on to compartmentalize the work. He says, “Be sure you build some time in for rest and relaxation. I love to watch certain television shows. Everyone knows when they would come on, don’t call me on those particular nights because you probably won’t get an answer.”

For Hugine, the most important member of his team has been his wife, Abbiegail, who has taken on numerous initiatives to not only promote student success and recruitment, but help promote the university’s brand with external stakeholders as well.

Hugine says that he is looking forward to being able to spend more time travelling with his wife and with their grandchildren when he retires at the end of this year. Dr. Hugine and his wife of almost 50 years, Abbiegail, have an adult son, Andrew Hugine, III, and a daughter-in-law, Karen; a daughter, Akilah Hugine-Elmore, and a son-in-law, Quincy Elmore; two grandsons, Amir and Kal-el, and a granddaughter, Nylah.

Andrew’s ambition is for education to actually progress to the point where, everyone can learn in a variety of ways and in their unique learning style. The present generation has a variety of learning approaches and speeds.

Andrew’s goals for Alabama A&M University are straightforward. He wants to align education with technology so educators will be able to genuinely individualize instruction and get to a point where people may study at their own pace, in whichever mode best fit their learning style like and have on-demand instruction. As a result, the objective is for this university to continue to develop and expand online learning, virtual learning, and artificial intelligence instructional modalities. “There’s leadership in place to achieve that, and so those are the plans that I see for Alabama A&M”, he claims.

University of the Cumberlands: Preparing Students for the Future with a Quality, Affordable Education

Alexandros Manakos: A Cyber Security Thought Leader with the Vision of...

University of the Cumberlands: Preparing Students for the Future with a...