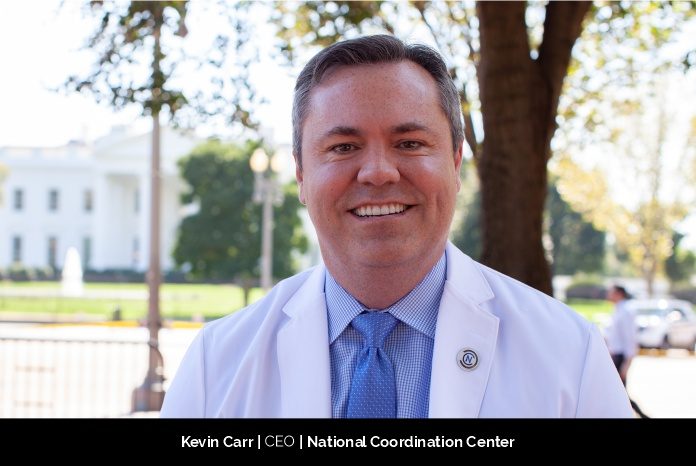 Dr. Kevin Carr was diagnosed with cancer as a newborn. His parents were informed he wouldn’t live to reach his 16th birthday and would almost certainly be intellectually handicapped owing to the link between that type of cancer and developmental delays. Kevin’s father worked in construction, while his mother was a homemaker. Dr. Carr’s parents were always exceedingly cautious with him due to his medical issues. As a result, they excluded Kevin from many of the active tasks of running their little farm that his brother handled.

Against all odds, Dr. Carr beat cancer. And because of his childhood difficulties, Kevin was inspired to become a physician. Today, he is the Chief Executive Officer of the National Coordination Center (NCC) and its supporting consulting entity, Edera L3C, in Washington, D.C. The NCC is a group of public and private sector advisers that use the benefits of collaboration and partnership to address complicated healthcare challenges.

A Dream to Become Someone

Dr. Carr aspired to be a leader as he progressed through medical school and residency. As he became older, he became more concerned with the impact he had on the portion of the world over which he had influence.

Dr. Carr’s shift in viewpoint began while he was looking for a position at one of his former workplaces. Psychological and cultural fit screening is part of that employer’s procedure for direct-admit partners. He recalled, “One of the exercises the interviewer asked me to do was, “Imagine you were at your retirement party. What would people say about you? What would people remember you for? My response was, I hope that at the end of the day, people say I helped them do the things that were meaningful to them, that I was nice to people, and I had made an impact in the world.”

The problem with answering the question was that Dr. Carr had never actually imagined himself at his own retirement before, so when he answered the question, he had to then ask himself another question, “Am I on track to have that response at my retirement party?”

Over the next couple years, Dr. Carr felt like he was on track for the first two, but not the third. He states, “I felt that I had made an impact on the clients I served and the projects we had done, but the outcomes were more focused on making the companies more successful. So the companies were more successful and they made more money. But I really wanted to be able to check that last important box of having a more substantial impact. When the opportunity to start Edera to operate the NCC came along, it was impossible to do anything other than make the move.”

The Edera L3C team assists organizations in overcoming their most difficult issues by linking them with the industry’s best and brightest minds. It is a world-class consultancy that creates, executes, and manages actionable plans to help clients succeed in a changing health care environment. Edera L3C has established the National Coordination Center (NCC), a national network of expert advisers (Industry Best Practice Advisors, or IBPAs), to assist in the resolution of complicated health care challenges requiring several organizations.

To assist the crew in completing its objective, the business has created some genuinely unique technologies. Compass™ is an innovative application suite that combines cutting-edge technology with time-tested best practices to provide powerful solutions for health care systems and government agencies. It’s much more than just a tool. Dr. Carr asserts, “As a physician, I knew we needed to build health care technology with both the physician and patient in mind. Having the input of clinicians for the entire development cycle of Compass truly sets it apart.” The company took this same design philosophy when it developed its telehealth technology, VirtuVisit™. VirtuVisit is a game changing solution that harnesses the power of Epic and Amazon to deliver a seamless, quick-access telehealth experience for patients and care teams.

Edera L3C is a low-profit, mission-driven company formed by individuals from Yale’s Center for Outcomes and Research Evaluation (CORE), the Center for Medical Interoperability (C4MI), the Patient Navigation Institute (PNI), and other health care organizations. The team states, “Our low-profit focus drives another of our innovations, GiveBackRx. As part of our commitment to give back to the community, NCC has supported the creation of this prescription discount card that provides consumers savings on their prescription drugs. The program presents a unique opportunity for consumers to donate a portion of their prescription purchases to a nonprofit organization or charity.”

Dr. Carr’s first work was cleaning chicken houses at an Alabama poultry operation, followed by bagging groceries at a Piggly Wiggly grocery store. Throughout college, he worked several jobs, including as a research assistant at UAB. He has worked as a bank teller and loan processor for a local credit union. His first medical position following residency was at Yale, where he assisted in the establishment of a program for underprivileged residents in the state of Connecticut. As part of the initiative, he and his colleagues established a charity network of physicians who all committed to provide a certain level of free treatment to uninsured patients, and then they created a care management tool to disperse patients around that network. Instead of sending them invoices, the team wrote them thank you notes in which they conveyed their appreciation for their dedication to the cause.

Significance of Innovative Ideas in the Company

Dr. Carr has worked at some of the largest consulting firms in the country, including BearingPoint (KPMG), Accenture, and PwC, along with working within the respectful environment of Yale. Along the way, he learned that innovation only occurs when one gives people broad guiderails and allows them to personally innovate. Innovation only comes from a group when an individual sparks a really good idea. He opines, “Individuals on the team have to believe two things are true: they will have a role to play in executing the innovative idea (otherwise they will keep it to themselves), and if their idea is bad, people will not stomp on it (resulting in them feeling intimidated or stupid). At NCC, innovation springs from people having the freedom to be whoever they want to be. When people have that kind of freedom, it unlocks their potential to do their best work. It makes them better and makes the company better as a whole. This is very motivating for me.”

At the beginning of the formation of the company, Dr. Carr tried to plant seeds of ideas that others have fertilized and grown. He states, “They are no longer just my ideas. They are better than the original idea I had planted, because we gave people permission to own them and make them their own. I am personally proud when I see that happen because I don’t believe that any one person can make a true impact on healthcare alone. They always need to take a team approach that leverages the collective strength of the team to take the answer to problems to the next level.”

Views on Professional and Personal Life

Dr. Carr would not say that he has a good work life balance. He works all the time, but he loves what he does. He says, “I truly do love the people that I work with. They always say that it’s not work if you are doing something you love, and it turns out that is true. Although there are of course days when I feel frustrated because someone did something they should not have, or a partner is exhibiting bad behavior,” Dr. Carr emphasizes.

As far as employees being motivated, Dr. Carr thinks the most important thing is giving them room to do their job. He recalled, “When one of our clinical leaders started, I micro-managed her and tracked every task. One day, she pulled me to the side and said, “You know, Kevin, I got this. I know this company is your baby, but I am going to take care of it.”

NCC recently did an employee survey, and over 90% of employees stated they wanted to stay with the company for a longer term (i.e., over five more years) and their favorite thing about the company was the other employees. That made Dr. Carr the happiest ever, because a company should never be about a single person, but rather a team of people working together.

Heading to Reach New Boundaries in the Future

The NCC’s tagline is “Connecting the brightest minds in healthcare.” The team has extended that goal to include bringing those concepts to reality. This entails providing technical solutions to help consumers handle the challenges of the new virtual world and functioning differently based on network-gleaned best practices. Dr. Carr believes that when the network begins to absorb global best practices and evolves into a global workforce, it will grow smarter.

In terms of influencing change, Dr. Carr now spends virtually all of his time determining what the team needs to accomplish to support the company’s development. He opines, “I feel that we have the right team to be successful and the most important thing to me is keeping them happy and motivated.” He also adds that as above, the plan for NCC is to continue to expand its geographic reach and incorporate insight from the NCC IBPAs into its operations.

Kyle Wallgren: Set to Change Millions of Lives through His Education App

Doug Smith: Changing the Perception of Profit with A Vision to Build A Sustainable Future