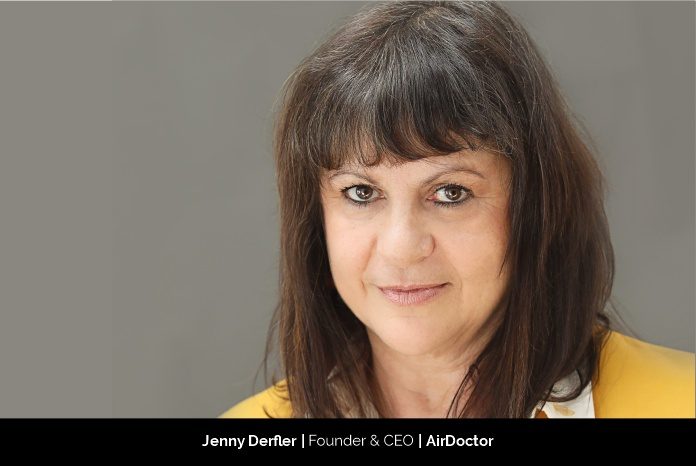 There are firms that provide digital solutions for scheduling medical visits; most of them operate on a local domestic level. In the United States, Zocdoc focuses on the domestic market rather than international tourists. The same may be said about Doctolib in France and Practo in India. They’ve all gotten hundreds of millions of dollars in investment and are valued between half a billion and two billion dollars. Air Doctor, founded by Jenny Cohen Derfler, was the first to target the global market for international travellers, with a current network of physicians in over 61 countries, and a digital platform in six distinct languages.

Jenny states, “We are unique in our ability to customise our product through our own developed technology to the specific needs of insurers and OTAs. We are the first and only company providing healthcare for travellers through partnerships with close affiliates, through our B2B model.”

According to Jenny, the major objective of Air Doctor is to provide travellers with peace of mind when they are faced with a medical emergency while travelling. Rather than ending up at a local hospital for a mild case of fever and paying for pricey medical care, Air Doctor provides a simple option. All that is required to use the Air Doctor app is to search for the right specialty, select a doctor from a list of licenced, trustworthy doctors in the region, and make an appointment without incurring any additional fees. She describes the procedure as “fast and efficient,” which is precisely what a tourist needs when they become unwell while visiting a foreign country.

Furthermore, by referring patients to nearby private clinics, Air Doctor relieves strain on local emergency departments, which may be overburdened with Covid-19 cases, and provides a new source of income for local doctors, allowing them to enhance their profits.

The Journey That Set the Stage for Air Doctor

As an adolescent, Jenny was a leader in a youth movement in Uruguay and Argentina throughout her high school years. She then went to a Kibbutz in northern Israel, where she worked the soil, raised chickens, and milked cows. She was also highly involved throughout her time at Haifa University, where she was a member of the students’ organisation and worked as a street-corner leader with underprivileged youngsters. Later on, she worked for Intel Corporation after managing a community centre in a low-income area. She put a lot of time and effort into understanding technology and being able to solve problems with it. She was the first in the field of industrial lithography to create unattended operations.

Jenny had a spectacular career at Intel, starting from the bottom and climbing through the ranks to become the Manufacturing Facility General Manager, one of the most senior positions at Intel Israel. She recalls, “My factory got to export $1B a year worth of products and employed directly and indirectly over 3,000 people. Ultimately, we merged with another European semiconductors company in the flash memory business, ST Semiconductors.” Numonix, an Intel subsidiary, was eventually purchased by Micron Semiconductors. Jenny’s entrepreneur side began looking for a new way to make a difference in people’s lives outside of technology, and she discovered Better Place.

Jenny sees success as the feedback people get if they are doing the right things, and for that, it is extremely important. She states, “But how do you measure success? The definition changes from time to time and from business to business; from MVP to penetration to scale up to profitability, it’s a pretty varied term. “

Jenny attributes her success to a unique combination of factors, including enjoying what she does, emphasising the importance of empathy, setting challenging goals, instilling a sense of adventure in everything she does, and, most importantly, allowing her creativity to flourish, which is the main key to any entrepreneur’s success.

Always has a Winning Spirit

Jenny had always aspired to lead individuals and teams to accomplish extraordinary feats, and to do what others thought was impossible. She was a survivor of adversity; her mother died of cancer when she was nine years old, and her father never recovered from the loss of her mother. Her father died when she was eighteen years old. She says, “I don’t remember thinking that something was wrong or of pitying myself. I just figured that this is the way it is, and that is it.”

Jenny states, “My main gift and curse are my curiosity.” She sees, curiosity as the foundation of inquisitiveness, as well as her interest in a myriad of areas. She was always looking for the next challenge, to excel in something even she didn’t have the training or skills to do. She states, “Debrief the problem into pieces, use team intelligence to put it back together, and find the way to get it done; but not only do it but do it better than anyone else. For me, that is what it means to excel.”

Jenny has made it a point to get to know everyone from Air Doctor’s first Day. When she gets to work in the morning, she opens her window curtains and lets the light of a new day shine through, highlighting and creating shadows. As part of her daily routine, she then checks the overnight status of her plants’ development. She says, “With my coffee mug in hand, I walk around and exchange a few words with everybody. During the day, time is divided between building the future with shareholders and investors and responding to the daily operational and technology challenges. “

The Air Doctor team is balancing the requirement for insurers to manage costs and avoid fraud and abuse with the need of consumers to take control, pick the medical treatment they require, and schedule appointments online from the palm of their hand (mobile phone). The team was able to meet both needs by developing a digital solution that meets both of them: a rapid, cashless procedure that provides authenticated service.

The platform proved to insurers that it could save at least 20% of their current claim expenditures, as well as an additional 11% owing to the shift from hospitals to community doctors. And the platform offers all this without taking any additional handling fees. The insurance industry is looking for three things:

A Work of Humanity

Jenny considers the greatest Air Doctor accomplishment to be its human capital. The team’s primary goal as founders was to create a service that would not only provide a digital solution for travellers, but also provide them the peace of mind of knowing that someone would always be there to support them in their time of need.

The team successfully gathered a group of people who share the same values and commitment to its customers. Jenny opines, “You can find them staying on the line with a mother and her sick son for hours, throughout the entire process of finding the right doctor, getting the right treatment, and making sure they are alright afterward. Or the employee that searches for a customer’s nearest Covid-19 testing so they can get on their flight on time. It’s the messages we get from our customers telling us we saved their entire trip and asking us to pass on their gratitude to the representative they talked to. “

No technology can mimic the human spirit of helping each other during a time of need. And so, Jenny sees her work as the privilege of creating a business with a huge economic upside, but most of all, a huge human benefit. “It doesn’t happen to entrepreneurs so often,” says Jenny.

Vision for the future of Air Doctor

Jenny prefers to be a decacorn rather than a unicorn. She aspires to make medicine accessible to everyone, everywhere, in a matter of minutes. More individuals prefer to travel knowing they have a medical answer. More physicians want to expand their services and reach a broader audience, and more insurance firms are realising that travellers these days prioritise their health safety first and modify their services appropriately.

Jenny’s advice to young leaders is to “when you are in doubt about what to decide about a work dilemma, remember that you will need to look at yourself every morning in the mirror and like what you are seeing.” She mentions that once she understood this, decision making became much easier for her.

She asserts, “Enjoy the road. When you achieve the dream, the road ends. The most important and enjoyable part happens when we are walking.”

Dr. Elaine Wallace: An Educational Stalwart of the Noble Profession.

The 10 Most Innovative CEOs to Watch in March 2022

The Most Successful Business Leaders to Follow in June 2021

Andy Khawaja: A Genius of Innovation