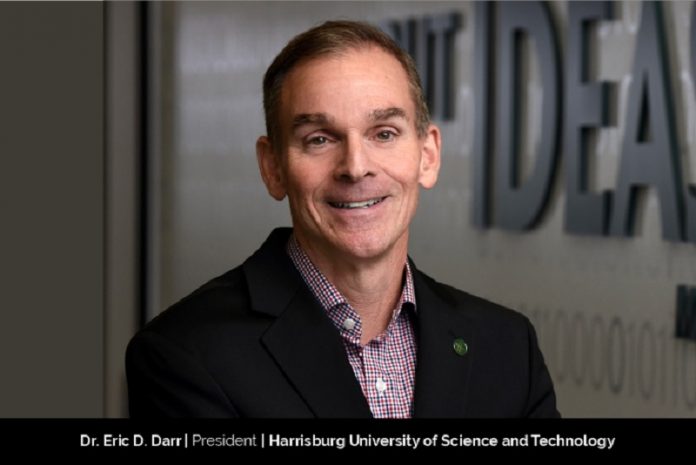 Harrisburg University of Science and Technology offers STEM-focused degree programs that equip students with the skills and knowledge they need to build a successful career. And the University stands apart from other STEM universities because of its very flat organizational structure. It does not have departments. It also employs no deans, and it does not offer tenure to faculty. And there is no centralized budget as well. Fiefdoms cannot take root here because of that.

And, in comparison to its competitors, Harrisburg University offers its faculty higher salaries. Dr. Eric D. Darr, President of the University, points out that they have one administrative assistant and 297 full-time employees working at the University. And they rarely take years to turn an idea into reality.  They take less than six months to move new academic programs from the idea stage to the launch phase. “And any person on the campus can get time on his calendar to walk in to pitch an idea,” Dr. Darr says.

As President, Dr. Darr is responsible for setting the strategic vision for Harrisburg University. Additionally, he also sets the core values and culture of the institution. And other chief responsibilities include working with senior management and the president’s cabinet, serving as an ambassador, spokesperson, and fundraiser.

A University Started by a Community for the Community

Harrisburg University was started by a community for the community. In the mid-1990s, a group of community business leaders recognized the value of integrating STEM education with economic development. And they founded Harrisburg University of Science and Technology in the Commonwealth of Pennsylvania in 2001. For the first time in more than 100 years, an independent science and technology-focused, nonprofit University was established in Pennsylvania. Previously, Carnegie Mellon University (CMU) was founded on similar principles in 1900.

In 2005, Harrisburg University was chartered by the Pennsylvania Department of Education, and in 2009, it received accreditation from the Middle States Commission on Higher Education. And by founding this University, the group of business leaders aimed to address the need of Pennsylvania’s capital region for increased educational opportunities in applied science and technology-related fields.

Dr. Darr says that the vision of Harrisburg University is to provide academic programs at undergraduate and graduate levels for a diversity of learners, using student-centered, technologically advanced, and experiential learning designs that emphasize student success, with a sharp focus on specific interdisciplinary competencies and strong linkages to career development.

“The desired outcome is the emergence of well-qualified, technically expert graduates whose understanding of applied science and technology-related fields is honed by direct industry experience and rounded by a sound, cross-disciplinary liberal education,” Dr. Darr says.

In August of 2005, the first class of students enrolled in Harrisburg University. Starting a university from scratch was a challenge and a process not for the faint of heart. And community business leaders could build it only because of their entrepreneurial spirit.

When the University opened its doors, all students were assigned a community mentor. And they were required to do an internship as well. Dr. Darr says the University even enlisted the help of an executive search firm (ARCUS) to help students find internships/jobs.

“By providing students access to top-of-the-line scientific equipment from day one, students were more motivated and garnered valuable experience that helped them land internships and careers,” Dr. Darr says.

He also points out that the early graduates of Harrisburg University worked at big companies such as EA Sports, Google, BlueCross, Sam Adams, Commonwealth of PA, and GeoDecisions. They held high positions in their respective companies. They also went on to graduate schools including medical school.

“Harrisburg University delivered a STEM education to its students that they couldn’t get anyplace else,” Dr. Darr says. “Additionally, the University gave students who were passed on by other colleges a shot at STEM education.”

The University has a 91 percent placement rate for its students, and in the initial years, they had more than 50 percent minority students – today it is 62 percent minority – and 50 percent women – now 34 percent. The University currently has more than 6,000 students representing 102 countries. Its physical footprint in downtown Harrisburg has grown from one building to seven. It also has a location in Philadelphia and a new location in Panama.

Correcting What Was Wrong in Higher Education

Founders of Harrisburg University learned from blunders committed by other higher education institutions and ensured that they do not make similar mistakes. One of the corrections that they made was related to tenure. It eliminated it. When they made that decision, they were warned that they would not attract anyone with a Ph.D. But the University received more than 400 applications for its nine founding faculty.

Dr. Darr points out that the University also did not incorporate many functions into its fledging campus system. In fact, it outsourced functions such as housing, parking, food, and career services. And, for teaching in classrooms, it also hired corporate faculty along with the full-time faculty. For example, Dauphin County Coroner Graham Hetrick taught forensics and crime scene investigation alongside the forensics full-time faculty member, Dr. Rob Furey. “This ensured that the world of the classroom was grounded in the reality of the workplace,” Dr. Darr says.

Soon, Harrisburg University was able to raise $45 million in its first comprehensive fundraising campaign. This investment allowed it to build its $75 million academic center.

Focused on Being a Teaching University

In the beginning, Harrisburg University’s focus was on being a teaching university. It had no plans to pursue excellence in research, and hence, the faculty was not living in the “publish or perish” mindset. “The University focused on faculty working with students and mentoring the students to graduations. Academics were challenging but achievable,” Dr. Darr says. “Additionally, the University has always operated on a market-facing approach to offering academic programs and its delivery method for programs.”

Dr. Darr points out that long before the University opened its doors, it surveyed more than 100 CEOs and over 1,000 others in the commonwealth to get feedback on what skills employers wanted in their new hires and what fields they were struggling to find graduates. And based on those surveys’ results, the University determined the core competencies that it wanted its graduates to possess. The first nine academic programs that it offered were also based on those results.

Today, Harrisburg University, however, has evolved into a world-class research institution and has one varsity sport (eSports) department.

Students who are not adequately prepared academically in high school struggle to pursue STEM programs at the college level.  “It can seem overwhelming to a new student,” Dr. Darr says. So, Harrisburg University has added many tutoring options in its Student Services team to help retain more students. Additionally, it offers its students four seminar courses. The first-year seminar course focuses on issues and topics of concern to a new student, while the second-year seminar focuses on different topics. “This has helped our students,” Dr. Darr says.

He also says that there are a variety of ways in which technologies influence students’ learning and engagement within STEM subjects. “Innovative technology makes it possible to work on solving problems never attempted before,” Dr. Darr adds.

Success Coordinators: The Student Success Team provides students the tools and skills necessary to be both academically and personally successful as a student at Harrisburg University. A success coordinator is assigned to each undergraduate student. And students receive advice, both academic and holistic, from their respective success coordinators throughout the enrollment process.

“We understand each student is unique and provide personal support to adapt to each student’s needs,” Dr. Darr says. “The Success Coordinator guides students to explore academic goals and assists in course selection for their academic program. We also assist in connecting students to on-campus and community resources.” The Student Success Coordinator navigates with a student as the student completes each academic year at the University.

Connection Leader Program: A peer mentor program, the Connection Leader Program aids in the successful transition of new students to collegiate life and expectations. It includes student orientation, welcome programs each fall, and the freshmen success seminar. During each of these sessions, new students are encouraged to learn more about classes, academics, social events, study skills, and everything else that will help them to become successful.

Career Services and Experiential Learning: Dr. Darr says that Harrisburg University connects students’ education to the concrete needs of the career world. “Our experiential learning program and internship requirements help you synthesize the concepts you’ve learned across the curriculum and put them to work,” he adds.

Measures Taken by University during Pandemic

The Covid-19 pandemic has impacted almost all higher educational institutions. Most adopted remote learning models to ensure that their students do not suffer. And some institutions tapped into a hybrid learning method.  Dr. Darr points out that Harrisburg University was already delivering academic programs in a hybrid format to graduate students. Additionally, it was in the midst of preparing to launch Harrisburg University Online, a new method of delivering undergraduate programs.

“When the pandemic hit and HU had to move entirely online, we were ready with new programs that could still deliver the “hands-on” components of Harrisburg University’s education,” Dr. Darr says.

Roadmap for the Future

“Harrisburg University will grow in size in terms of its student body, faculty, and physical plant in downtown Harrisburg,” Dr. Darr says. “The University will launch new programs that respond to market needs. And we will grow our locations around the globe.”

The Most Influential Educational Experts Making A Difference in 2021

The 10 Most Influential Business Leaders to Follow In April 2022