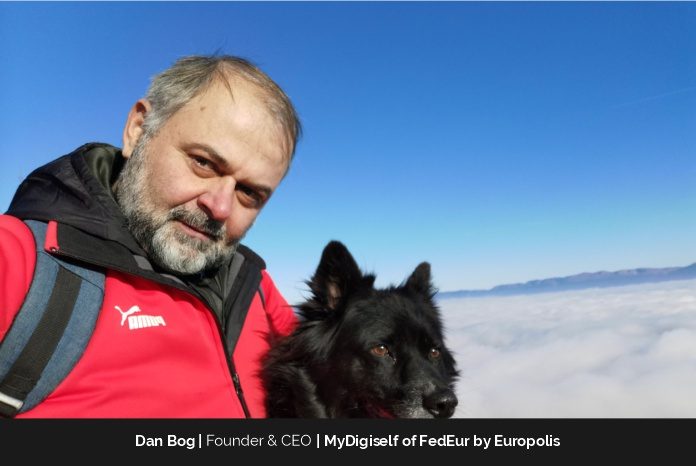 There is no lack of creative ideas to start a business today and every day we can see news flashes of thousands of new start-ups coming up across the world. Startups may be small companies, but they can play a significant role in economic growth. They are the centers of innovation; and create jobs which means more employment, and more employment means an improved economy. A startup is called digital when its main assets are linked to technological investments and innovations.

Dan Bog is the Founder & CEO of MyDigiself by Europolis – a unique digital start up that is now booming under Dan’s exclusive leadership. MyDigiSelf will be the next Human Resources network platform of those freed digital-self owners. It is a EUROPOLIS initiative as a Non-Governmental Organization aiming to defend the Digital Human Rights in the era of collective digitalization. MyDigiSelf is the next level of digital-self-consciousness and defense, the only HR value self-regulator. “It is the only way to be yourself in today’s informational world and to earn from you,” states Dan. You can own your digital (data & software) parcel through Digiself.me and take control of the information value and of its benefits. Unique indeed!

Success and manifestation is impacted by our actions

Dan believes that the dimension of success is the measure of the systemic impact that our actions and knowledge give back in added value to what has built up to the point where we give more than we take.

He says that our expression here within the 4 dimensions of space-time through which we travel with our multidimensional being exerts its qualities by shaping the matter subject to time and by improving its manifestation. Our real self is glimpsed through its shaping effect on the existential world and not through its possession.

Dan says that the mechanisms by which our spirit manifests, or our design as an eternal being, have certain characteristics. Like in engineering, they must be tuned. Hence, roadblocks are checkpoints on our way to perfection of what and who we should become.

In Dan’s case, an example would be that while he foresees future needs and technologies, he releases them too early, before the “wave” that is the maturation and mass acceptance of the concept in question.

What is happening now in VR for technology management, they did 15 years ago for gigantic projects in the offshore oil industry and others (iMediaVirtual), but the industrial market and digitalization were not mature enough for a systemic acceptance, only now. Or the reverse effect of the prediction, when 20 years ago Dan turned down an invitation from a US funds capital to create a social HR platform before Linkedin, based on the information model that he successfully built for the science content generation network platform Nanopolis, on the grounds that he considered the digital consciousness of the masses to be at the stage of liberalism that can only be seen these days.

The moral of his refusal did not reflect the reality that followed, namely the construction of the BigData industry based on social platforms whose raw material consists exclusively of the digital profiles of its users without considering them as co-owners, according to the fundamental right of the constitution of the American and European states, namely the property of oneself.

At the time, Dan believed that society would condemn such large patronage of the digital self of the people through today’s social platforms, based on the mass speculation of the individual need to be seen in the shape that each describes themselves, but without being a co-beneficiary of the resulting informational economy.

Now, however, with the right means and in the wake of Web3 decentralization and blockchain distributed encryption, a revolution to free the digital self from the slavery of BigData is possible and even inevitable in today’s information age. “So, these are the elements that helped me understand that it is not enough to be foresighted, but to understand the “time” of the consciousness of the collective target as well as the rhythm of the interference in its value of manifestation, to resonate with the frequency of the manifestation of the need and the maturity of the society,” he states.

Under Dan’s leadership, their team’s mission is to develop the Human Resources Network of the owners and beneficiaries of their own digital-self, shareholders of the first data-sovereign NFTs Company (their FedEur Spin-off Company).

Each DigiSelf member of the Europolis Association (Europolian) will receive the blockchain token of her/his shares of the company FedEur plc which owns the software and data of their social network. So, the FedEur shareholders are exclusively those who are MyDigiself members of Europolis and therefore the owners of their digital self. “In this way, each of our digital profiles becomes an NFT with a value that will self-regulate when our DigiSelf network represents a critical mass of human resources. Thus, all the other social network profiles of each Europolian will become avatars of the only digital self of the NFT owner!” explains Dan.

The digital construction of the MyDigiself.com network (Digiself.me) guarantees its members the right to hold FedEur tokens within their tokenized blockchain company, while protecting them thanks to a token-based data exchange volume rating system.

Recognition received and responsibilities as a business leader

Springer-Verlag marked the beginning of Dan’s career after he started his first science and education software company 25Y ago. He states that his life before Europolis is made of a multitude of facts, love, projects and companies whose steps led him to the Digiself.me startup.

This scientific publisher (the 1st in the EU and the 2nd in the world) is the one that validated his first global educational e-platform based on a triangular IT model Education-Application-Research. It unhesitatingly financed the launch of what became 20 years ago the Nanopolis encyclopedic tetralogy, the first online generated multimedia platform on nanoscience, nanotechnology, nanobiology, particle physics and accelerators, with over 3000 interactive topics of recognized pedagogical interest and internationally awarded for IT advancement in scientific-educational e-learning content.

Dan, who claims to be a straight person like a sword, is the architect of the digital trinity Europolis-FedEur-Digiself (digital will – digital body – digital spirit). “I am coded ‘Digiself’, it is not the software of my mind, it is part of the very fabric of my spirit,” he exclaims.

“The future of MyDigiself is our future together,” says Dan. It is about the freedom of the expression of self, about the projection of the common consciousness of free humanity in the digital era of information. It is about to be or not to be.

Dan says he has always done what he wished to do. He further states that as he understands things, he wishes to do more, and it will never end because his dream is not for himself. Now it’s for that HR company of those millions of shareholders freed in digital.

“Alone we will never make the digital era. Only if we are together will we make it.  The close perspective of ​​a global digital freedman shareholding company makes me very excited!” he exclaims.

Dan’s personal goals as an entrepreneur

“I would be very happy if my goal here is to participate to bring society to a higher level, closer to an interstellar society. That is the only meaning of everything we do, to build a better world and to break away from Earth before its resources run out!” says Dan. He believes this is the only way we can save and be worthy of the fantastic intelligence of life’s genetic code here, in the “manifested” world. That would be the goal of all of us and he would like to be a part of it.

His advice to aspiring entrepreneurs is: Look at yourself and try to understand what you are and how you are!” See your design and do everything that fits with it. Then you will be yourself and everyone will be happy with you. You will be the best entrepreneur by simply being yourself.

Nalini George: A Strong Believer in Discipline and Organizational Ethics while Ensuring Compliance and Bringing a Change

The 10 Most Innovative CEOs of the Year September 2022