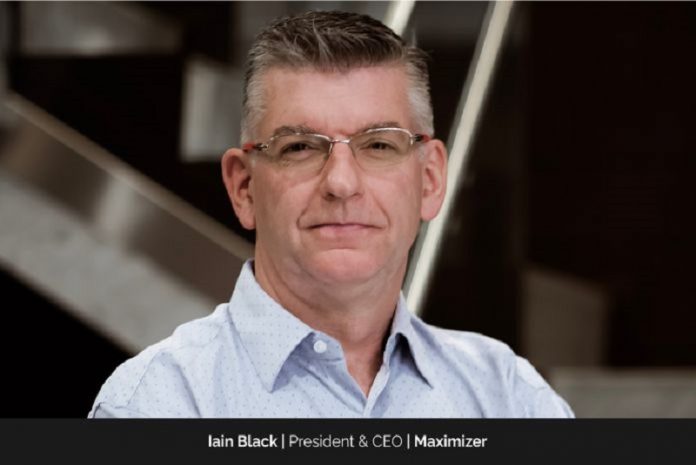 For the software company that set many of the industry’s early benchmarks, Maximizer is once again showing the world how it’s done in the Customer Relationship Management (CRM) space. They were setting standards even before those three initials got clustered together.

With their deep bench of tech talent and a new focus, they are poised to reinvent the sector all over again. Better than that, they have the track record to hold in their hands what most others in the saturated CRM field can only wave at.

“For today’s sales leader surrounded by confusing choices, Maximizer just might be the greatest CRM company you’ve never heard of,” said Maximizer’s President and CEO Iain Black, reflecting on the explosion of new competitors over the past two decades. “We’ve been assisting companies to grow and develop their customer base for more than 30 years. Think about that number. When you think about the tech sector, that’s elite staying power.”

Black added that what hasn’t changed are the universal and non-negotiable sales requirements that are reflected in Maximizer’s code and baked into their visionary relationships with both customers and business partners.

It’s about to get leveled up yet again. Maximizer is set to unveil a major next step in late 2022. It is a product announcement “quietly described by some of the company’s global partners as the most significant in a decade,” Black said.

From Pioneer to Disruptor: Reasserting what really matters

Part of staying current in the tech sector means constantly evaluating and evolving internal operations and development methodologies. Black has just completed an overhaul of the company, leading the operation through a comprehensive three-year transformative process enabled upon his arrival in fall of 2019.  The challenge – and the joy – in that exercise, he says, was keeping intact the magic that has enabled a three-decade-old global software company to stay relevant through a dozen or more major shifts in the technology industry over two generations.

That 30-year journey of innovation and success was not one traversed by Maximizer alone.  Along for the ride was every client they have ever had, as those customers in turn used Maximizer to sell their products and services and produce ever stronger bottom lines thanks to what Maximizer does for them.

Maximizer’s history goes back to the first contact management systems (CMS), which evolved into sales force automation (SFA) systems, and then ultimately to the earliest incarnations of what we now commonly call CRM systems.

“Essentially, we were in the CRM business before CRM was a thing. Our company has both evolved through – and helped lead – profound changes in customer expectations.”

As a CRM provider, Maximizer’s software provides the expected critical functionality for managing contacts and a sales team’s various touch points with them. The benefits of customized workflows, collaboration, and a shared database extend to robust reporting, analytics, and dashboards.

While you might find one in the Head Office archives, it’s been a few decades since floppy disks were used to install Maximizer software. Today, most customers onboard Maximizer in a SaaS (cloud) environment leveraging Microsoft’s global Azure network to ensure the performance, data sovereignty, security and reliability customers expect in 2022, along with a complimentary mobile application for iOS and Android.

Early on Black detected that Maximizer had an unleveraged advantage relative to all the other CRM companies in what he knew to be a saturated market. There are hundreds of them out there trying to get your attention, usually with promises of “niche this” and “specialization that” or – worse! – trying to be all things to all customers. It’s a noisy and confusing marketplace.

Black saw something different in Maximizer, an opportunity to once again stand out in the big crowd. He was seeing most SMEs overwhelmed – either committing to CRM software options that are enormous overkill for their needs (and with corresponding high cost), or discouraged and exhausted trying to find a technology alternative that will simply enable more sales.

The downside to implementing otherwise elegant and robust CRM solutions – beyond cost – says Black, is that most competitors have lost sight of the most important criteria for why companies invest in CRM technology in the first place: selling.

“If you’re not selling more, the rest doesn’t matter,” says Black. “All the fancy metrics, dashboards, and analyses are irrelevant if the money you spent on a CRM system isn’t driving more revenue. Maximizer is not just an information tool, it’s a ‘making you money’ tool.”

In addition, Black realized any shift in their corporate strategy also had to include a tune-up of the software’s functionality and underlying architecture, so the talk could also have real walk.

Refocusing Maximizer’s product strategy was required, one that would tap into both the company’s storied history and its bench strength of technologists. Black knew this wasn’t to be a company burn-down, it was going to be a company build-up.

So, new product leadership was secured including VP Engineering, Alex Ackermans. Ackerman’s team set to work, fortifying the existing software with deeper and broader functionality, deploying a more contemporary integration capability (notably to enable complementary software) and embarking on a series of UI/UX changes. Meaningful improvements have accelerated from once or twice a year to almost monthly…something not lost on existing customers.

“We got calls right away,” said Black. “The last half of 2022 had us break out of the historical blocks of how we managed and improved our code, and it was noticed.”

Meanwhile the new SysOps team performed the “heart transplant” of moving the global production environment to Azure. This achieved the necessary bulletproofing of security, reliability, and ubiquity in a global, always-on, cloud deployment that will reflect any geography-specific requirement going forward, regarding privacy and the location of customer data.

However, by far the most powerful shift Black made to sharpen focus and drive the desired company-wide “sales leader perspective” was to bring in new key leaders to supplement the company’s decades of CRM technology experience. The goal was to renovate the culture, not blow up the old one.

“Our new executive team is insanely competitive,” said Black. “Almost all of them have had direct, personal accountability for driving revenue at one point or another in their careers, so they know firsthand the pressure and urgency of driving sales. They are thus driven to help others meet that challenge.”

Sales Leaders: “We feel your pain.”

“We have a profound understanding of the urgency associated with driving revenue and the challenges of managing salespeople,” Black remarks. “Everybody dances around the fact that the ultimate purpose of deploying CRM technology is for customers to sell MORE. Yet nobody else has thoughtfully and comprehensively focused their CRM product on the day-to-day pain points of the people actually responsible for achieving that: the revenue leaders.  Their responsibility is to assess and coach their people to the sustainable success expected. By isolating, embracing and supporting those leaders and their needs, we are beyond a simple CRM.”

Thus, the go-forward focus of Maximizer is on human behavior and using specifically designed CRM technology to help revenue leaders measure it, assess it, drive it, and then measure it again.

While Black is tightlipped about the specific details of the upcoming product release and the 2023 product roadmap, it is clear that Maximizer has re-found its groove and its ideal customer profile.

Black asserts that there are two types of people who will increasingly gravitate to Maximizer’s new offerings over other competitors. The first is the “frustrated SME Sales Leader” responsible for the collective efforts of a sales team who may or may not be following the provided coaching in pursuing new customers. The second is the “anxious SME Renewals Manager” responsible for repeat, recurring or contractually renewing revenue, who is worried over the likelihood of customers continuing to do business with them while simultaneously unarmed with the analysis as to where to focus or what to do.

In both cases, Maximizer’s stated commitment to also upgrade the Financial Advisor and Insurance Agency versions of their software means those customers will have pathways to the new functionality, analysis, and related resources the company’s got planned.

Customers can expect to see in the December 2022 announcement an enhancement of Maximizer’s existing Base Edition, but also a new “Sales Leader Edition” released.  Expect new modules to more closely track adherence to a customer’s desired sales processes, and to enable sales leaders to act, using the best indicators and predictors that show if your salespeople are on track to hit revenue goals.

Simply put, Black says, sales leaders need a tool for them, one that enables leaders to focus on the right metrics and then coach accordingly. “Sales Leaders want to know if their team is following their process from the outset, and if there’s a performance issue they need to rectify. They want to know in real time how the team is doing so they can modify behavior now, not after the quarterly sales reports come out,” Black notes.

Most CRM companies focus on the easier-to-measure lagging indicators (what deals WERE closed, and the progress of well-identified deals maturing through the pipeline). With their new Editions, Maximizer aims to equip the sales leader to better match the human behavior of salespeople with the leading indicators of your sales goals.

“Our new functionality and analytics will focus on what salespeople ARE doing, or are likely GOING to do, vs. what they have already DONE,” Black clarifies.

This is a key distinction, as leading indicators are the ones that provide true productivity insight and that best predict success. Leading indicators include the numbers of leads contacted, calls made, emails sent, videos shared, new sales meetings/discussions held, time spent in the field, follow-ups completed, proposals or quotes submitted, and the use of specific sales practices.

Expect Maximizer to steadily roll out additional sophisticated sales analysis and alerts capabilities over 2023 that harness these leading indicators.

Looking back on his first three years, Black acknowledges the constantly increasing customer expectations Maximizer has had to meet.

“Our new team has embraced all those expectations, and evolved Maximizer into a pointedly relevant, unique and contemporary voice in a crowded and noisy industry. We are again turning heads because of the simple belief that sales leaders need help getting the best out of their people, or the rest doesn’t matter.”

Reflecting on the next three years, Black grins.

“It is our mission to bring peace to the frustrated sales leader, and calm to the anxious renewals manager. Our steadfast belief in, and commitment to, this mission allows us to continue to assert ourselves differently than anyone else.”

Why use Portable EX Power Distribution in Oil and Gas Industry

The Constant Evolving POS Systems that are changing the Face of...